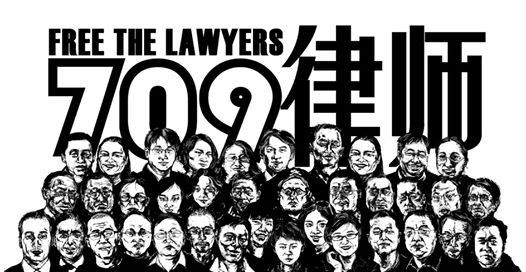 Today, July 9, 2021 marks the sixth anniversary of what has come to known as the ‘709 Crackdown’: the nationwide crackdown on Chinese lawyers and human rights activists on the 9th of July 2015. During the summer of 2015, the Chinese government began a large-scale operation in which it arrested, summoned or briefly detained an estimated 300 lawyers and human rights defenders. Law firms were also raided. Six years later the situation has far from improved.

As of 2021, lawyers in China are still hindered in the execution of their professional function in the judiciary system by threats, intimidation and judicial harassment. Lawyers in China working on sensitive cases have been subjected to harassment, improper interference, illegitimate prosecutions, unfair trials, and incommunicado detention, arbitrary deprivation of liberty and denial of access to an independent, impartial and competent judiciary to determine rights and criminal charges. Lawyers for Lawyers furthermore sees an increase in instances of administrative harassment such as the revocation of licenses to practice law, which causes a detrimental effect, if only because of the violation of freedom of expression and the deprivation of the ability of lawyers to defend sensitive cases and themselves.

In the wake of the 709 Crackdown several human rights lawyers have been detained because they stood up for the rights of those who were targeted in the 709-Crackdown. Among such lawyers are Li Yuhan en Yu Wensheng

Li Yuhan was arrested on October 9, 2017 and in November of that year charged with “picking quarrels and provoking trouble”. As a lawyer, Li Yuhan frequently acted in cases concerning freedom of belief, and in cases concerning access to government information. Li Yuhan also defended one of the most prominent lawyers targeted in the 709-Crackdown. Since her arrest, Li Yuhan has been taken in pretrial detention. On May 27th of this year Li Yuhan was supposed to have been officially tried, but no trial took place that day meaning that her pre-trial detention continues to this day. Li Yuhan suffers from several medical conditions, and has stated that she has been treated inhumanely during her detention, and has been refused adequate medical care. Applications for bail have been denied. As of January 2020, authorities have disallowed all visits to Li Yuhan, including visits by her lawyer, citing the COVID-19 pandemic. The current status of Li Yuhan’s health is unknown. Li Yuhan’s pretrial detention period is one of the longest in China that Lawyers for Lawyers is aware of.

Another Chinese human rights lawyer, Yu Wensheng, was arrested on January 19, 2018 for allegedly “inciting subversion of state power”.  Yu Wensheng is known for taking on a number of high-profile human rights cases, including the defense of fellow lawyer Wang Quanzhang, who was among the more than 300 legal professionals and activists arrested in a the 709 crackdown. Yu Wensheng went through a secret trial in May 2019 and neither his family nor his defense lawyers had been informed in advance of any hearing, and were only notified of the outcome afterwards. Yu Wensheng was sentenced to 4-year imprisonment followed by a 3-years’ deprivation of political rights on June 17, 2020. Before this trial, Mr. Yu had been detained for more than 500 days. Yu Wensheng’s appeal was heard on December 13, 2020 with the original verdict upheld. Lawyers for Lawyers has voiced concern before about Yu Wensheng’s health condition. Recently, we have received reports that Yu Wensheng’s health has further deteriorated since last January. Yu Wensheng reportedly suffered injury during his pre-trial detention. It has been confirmed by his wife that Yu Wensheng is no longer able to write because his hands shake too much as a result of his injury. He further suffers problems with his spine and kidney stones. On February 11, 2021, Yu Wensheng won the Martin Ennals Award, a prestigious human rights award, for his work to defend human rights in China despite many obstacles.

Lawyers for Lawyers has launched the worldwide two-year long #FreeTheLawyers Campaign December 10, 2019 to bring awareness, build support, and inspire action for the cases of amongst others Li Yuhan and Yu Wensheng.

Lawyers for Lawyers is greatly concerned about the deteriorating situation of human rights lawyers in China. Lawyers for Lawyers is preparing a Universal Period Review (UPR) mid-term report, for the review of the implementation of recommendations with respect to the rule of law and the role of human rights defenders accepted by China during the fortieth session of the United Nations Human Rights Council. The mid-term report illustrates that China has not adequately implemented the three recommendations of the 2018 UPR with respect to lawyers. The Chinese authorities have failed to respect the rights of lawyers by not adequately enabling them to perform their professional functions without intimidation, hindrance, harassment or improper interference. Furthermore, the Chinese authorities have failed to take substantive steps to uphold the right to a fair trial and to guarantee that every citizen has effective access to justice and legal assistance of their choice.