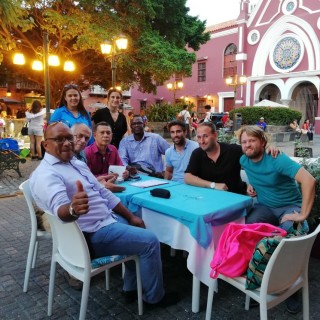 Long but satisfying days. The Caravana is up and running! Due to the large amount of information we have been able to gain from the several meetings over the last two days, I will only share some of the highlights with you today.

Following a full set of perfectly prepared presentations starting on Sunday morning at 9, given by the Peace Brigades International, lawyer of law firm CAJAR Luis Guillermo Pérez Casas,, magistrate of Jurisdicción Especial para La Paz Nadiezhda Henriquez and human right defender and lawyer Alirio Uribe, in the afternoon, Wout, Christian, Gemma and I took a  bumpy 90 minute flight from Bogotá to Cartagena, where our fact-finding work was about to start. After a warm (35 degrees celsius!) welcome at the airport, the local Colombian Caravana coordinators Claudia Flores Hernandez  and Eduardo Castillo Romero (living and working in Cartagena) drove us to our hotel, where we had some time to prepare for Monday’s meetings. Despite the lack of time for any touristy stuff, we did get a glimpse of the immense beauty of Cartagena’s historical centre. Its spectacular city wall and colonial houses were impressive. However, what really inspired me, was the following.

Meeting the victims of human right violations, is traditionally one of the most important moments of the Colombian Caravana. Not only do these meetings, during which victims and/or their lawyers visit the Caravana delegates in order to elaborate on the way they have been victimised, provide the delegation with detailed information of several heartbreaking cases. They also allow the Caravana to undertake action and ask for immediate public, and, if needed, international attention for the unjustifiable damage that the victims have been inflicted upon. Some of the cases that have been presented to us will appear in our final report so that they receive the required attention in order to as much as possible avoid further infliction and repetition of the occurrences.

Colombian human right defenders and lawyers that stand up for victims, literally risk their lives in even accepting some of the cases they handle. Especially the ones that involve homicides, illegal expropriation and land restitution of citizens and corruption in all sorts of ways. These lawyers are heroes. They are not just committed to their job, for example like regular humans as myself. Helping others in need is not their work, or their passion. It is their purpose, no matter the effort, no matter the circumstances. When Adil Melendez, human right lawyer, told me about his client portfolio, which includes a staggering amount of 5,000 (!) people, I fell silent. I couldn’t believe some of the stories he shared. Heartbreaking. I couldn’t believe the amount of clients he represents. Then he showed me his list of WhatsApp conversations and later on I realised that his name appears basically in every Colombian human right case involving land restitution cases of Colombian farmers. The one case more dangerous to his own live than the other. This man illustrates why Lawyers for Lawyers is crucial. A man like Adil deserves support. One of his cases also deserves special attention, but I will get back to that in one of the next blog posts.

Back to our schedule. After the first round of the victim visits, the Colombian lawyers had arranged a meeting at Cartagena’s prisons Ternera and San Diego. The idea of these meetings was to see with our own eyes how these prisons were managed and under which conditions the inmates have to survive. In order to save some time, we split up in groups. Lawyers José and Marcos took us to the men’s prison of Ternera. Wout and Gemma visited the women’s prison of San Diego together with Claudia and Adil. Apparently, the contrast between them couldn’t have been greater. Where Christian and myself were only allowed an off-the record overly positive meeting with the director, Wout and Gemma were free to access almost any part of the prison and even speak personally to some of the inmates. Where the conditions in this prison seemed relatively good (apart from the absence of any ventilation, the living circumstances in the Ternera prison are said to be a lot worse. Unfortunately we didn’t get to see the cells, but our general impression was that it can’t be close to paradise.

The plan for tomorrow is to welcome some more human right violation victims, and listen to their stories at Eduardo’s office. In the afternoon we are meeting a couple of the judges that work at the Cartagena court, after which we have an appointment with Cartagena’s public prosecutor.

About our group, I couldn’t have wished for a better set of people. It has been a pleasure getting to know them and look forward to further working with them this week, and perhaps in the future. Who knows?