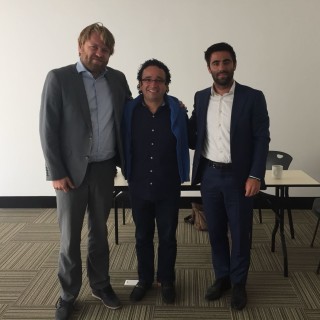 In my last blog I forgot to mention that our fact-finding mission in Cartagena was concluded yesterday with a short presentation at the University of Cartagena, where our amazing group coordinator Gemma summarised the observations Wout, Christian, Gemma and I made during our visit in the prettiest city in Colombia, in front of approximately 60-80 law students. In the afternoon we took a flight back to Bogotá and arrived without any problems at the hotel at 8 PM. There was barely time to even put away our bags, because at 8:30 PM, the region evaluation took place. During this meeting, the groups that had travelled to Cali, Medellin, Pasto, Bucaramanga and Cartagena, gathered and presented their conclusions, after which we could finally get some rest, restore our energy a bit and come back to life.

Now back to the order of the day!

On 24 November 2016 the Colombian government and the Fuerzas Armadas Revolucionarias de Colombia (FARC) signed a peace accord, based on which the FARC agreed to lay down its weapons after more than 50 years of rebellion. The conclusion of this agreement was supposed to be the start of a period of transition, from war to peace. Two years later unfortunately, unforeseen consequences have lead to the conclusion that the peace transition has been extremely bumpy and victims, lawyers and judges, have spoken out to us that so far peace has not been found. This is supported for example by the fact that since the peace accord, the assassination rate of social leaders by paramilitaries and criminal bands has substantially increased. Jorge Molano, a Colombian human right lawyer under constant threat due to the defence he offers to victims of aforementioned groups, explains that this increase is caused by the fact that when the FARC withdrew from the rural areas, these zones were left ungoverned, making way for other armed groups to gain these commercially interesting grounds. Local social leaders brave enough to stand up for the future of their community are easy targets: whoever opposes to the intentions of paramilitary groups or criminal bands is under high risk of being threatened or even assassinated. So are their lawyers. Wout and I spoke to Jorge Molano about his thoughts on this massive problem and the consequences for his life and work.

Jorge has been working as a human right lawyer for 30 years. His work has put him under serious threat in the course of the years, resulting in the assignment of protection measurements by the Unidad Nacional de Protección (UNP), a security organisation that operates under the Ministry of Internal Affairs. Jorge has a blinded car, and two unarmed drivers to protect him 24 hours per day. Despite the fact that he would prefer a life without them, he knows he has to accept what his life has become. The only reason I accept the protection, is because if I get killed, the government won’t take responsibility for my death because I rejected their measurements.

Jorge’s protection has been recently prolonged with another 12 months. Every year the UNP investigates whether protected people still require the assigned measurements and so far Jorge has not encountered any problems in acquiring the appropriate protection. For me there is no issue, he says. But German (German Romero, a colleague from Jorge’s firm), might lose his protection next year. He is still being threatened equally but the UNP has the authority to decide to take his protection away anyway. Without any cause. That’s how random some of the UNP’s decisions are. Jorge’s fear of German losing his protection is just one of the many worries that give Jorge’s profession an inhumane and bitter taste.

When asked how he sees his future, Jorge explains that he feels exhausted. For a minute his eyes seem faint; the energetic, charismatic man that entered the room thirty just minutes ago seems to have been replaced by the faded shadow of his past. Hay que recuperarme la vida, he whispers. I need to get my life back.

Jorge has decided to step back from 90% of his cases and to only focus on the cases that are still worthwhile in his eyes. Nine out of ten times it makes no sense to fight. I feel like I have been hitting into a wall for 30 years, that just wouldn’t fall. And now that wall is being strengthened.

I feel a desperation that is logical, but nevertheless preoccupying. In my eyes, Jorge is one of the men that represent the Colombian battle for justice. His voice in the field of human rights defence, is a soldier that cannot be missed at a time where the future is uncertain. My heart aches.

During lunch, after the meeting with Jorge, I speak to one of the most experienced Caravanistas present and tell her about my meeting with Jorge. She turns away and says she understands my concerns. I feel like she didn’t understand the seriousness of my story and feel somewhat ignored. But then she grabs my hand and looks me in the eyes. Ron, what you shouldn’t forget is that all people require peace of mind every now and then. Taking a break is not the same as giving up. Recovery is just the first step to a comeback and the cradle of change.

That same day I enter a nice little coffee place in Bogotá and find a poem on the wall. It’s written by Gonzalo Arango and reads as follows:

Original version: Translation (done by myself):

These word sum up what I think not only Colombia needs, but the entire planet. I then realise that maybe all Jorge needs is a hand. A feeling of support, no matter what he does. Even if he desires to take a break and rest. To feel like he is part of a team, and being more than an individual trying to tear down a stone wall with a feather. I guess what he needs is time. Just like Colombia. Jorge is the living sole of his country. A symbol that won’t fade away.