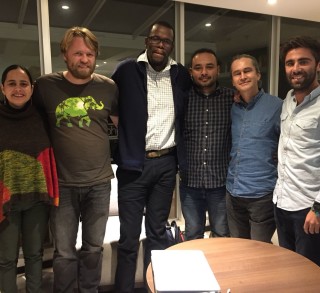 After reading my blog posts of the last couple of days, I realise that my stories haven’t been very cheerful lately. Of course it’s part of the mission to be confronted with emotional and at times heartbreaking moments, but that doesn’t mean that there hasn’t been any fun. After a week, I dare say that Wout, Christian and Gemma have become my friends, and we are already talking about organising a reunion when we get back to Europe. I’m proud of the way we have been working together: long, intense days, but always time for a joke and a laugh to put every situation in the right perspective.

Today was my favourite day.

It started with an early morning visit to the Colombian delegation of the European Union with a Spanish and an English Caravanista (for me the first time without Wout, Christian or Gemma this week), which was interesting due to the fact that the European Union appeared to be quite well aware of the cases of several suppressed Colombian lawyers. Knowing that the European Union, but also for example the Dutch embassy, is in contact with the Colombian government about these cases is comforting even though the EU’s power here is obviously limited. At least our Colombian lawyer colleagues have a way to connect with Europe if immediate aid is required.

After struggling my way through traffic with three different taxi’s in the late morning I arrived at the office, or should I say fortress, of the Colombian General Prosecutor (Fiscalía General), where I met with two prosecutors, two other Caravanistas and one of the co-workers of Rommel Durán, human rights lawyer Leonardo Marín. We were invited to discuss about the taskforce the Fiscalía General implemented a couple of years ago in order to improve the national human rights situation and stimulate the peace transition. I’m not going to quote Leonardo here, but let’s just say he was not impressed by the numbers that were presented by the Fiscalía General. His opinion is obviously coloured by all the horror he has witnessed as a human rights lawyer, so I can’t blame him for taking this matter extremely seriously. On the other hand, I must admit that the people we met showed a more than decent professional attitude towards us, so I feel the truth may be found in the middle: no, their effort is not even close to enough to end impunity of paramilitaries and criminal bands. But yes, the young department assessed with this highly challenging mission seems to be committed and improving. Years ago, assassinations of social leaders, lawyers and human rights defenders were hardly ever punished. The percentage of solved cases was basically nill. Today, this rate is estimated to be around 20%, meaning that more and more victims can be recognised and recompensated than before. Still a long way to go, but at least the right road seems to have been found.

Meeting wise, today was a fruitful day, but for me the great surprise was when lawyers Adil Meléndez, Rommel Durán, Leonardo Marín, and Gloria Silva, all showed up at the hotel lobby at night in order to meet Wout and me (see picture). They were all invited by us for tonight’s party organised by law firm Cajar in a cool bar right across the street of our hotel. honestly I was not sure whether or not they would feel like attending. But they did. That’s how Wout and I got the chance to interview Adil about his past, present and future. A separate article about him, and another one about Rommel, will be published in the near future.

More importantly, this evening was all about solidarity and friendship. A nice dinner, some drinks and a great Salsa style party with live music later, I understood that our Colombian colleagues hadn’t lost any vitality. It’s not like they don’t enjoy celebrating life anymore, even though their lives are mainly consumed by worries. I thought they must have difficulties with enjoying a night out. Adil’s salsa moves definitely proved me wrong there.

Like I wrote yesterday, everybody needs a rest every now and then. But the same goes for having a good time with friends. If celebrating life is not important anymore, then why go through all the suffering and sacrificing? I embrace this day and have promised myself to stay in touch with Adil and Rommel, who have treated me like a brother and friend since shaking my hand just a few days ago. Last week I didn’t even know them. Now they have stolen my heart. To me that is life.