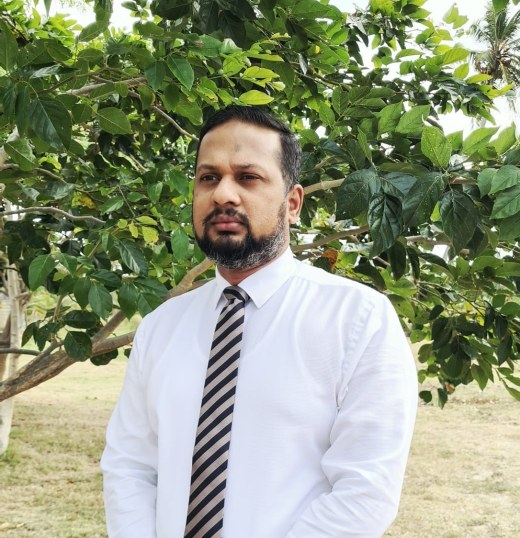 The Sri Lankan human rights lawyer Hejaaz Hizbullah was detained for almost two years, without knowing why. Meanwhile, there is an indictment, which seems to be out of the blue.

He looks relaxed, Hejaaz Hizbullah. During the video interview, the Sri Lankan human rights lawyer sits at home, in an easy chair. His two-year-old daughter crawls into his lap halfway through. When she was born, Hizbullah was in a police cell. “A week later I was allowed to see her for five minutes.” Hizbullah spent 21 months in pre-trial detention under an anti-terriroism law. Now he is out on bail.

Hizbullah had a commercial and real estate practice, but the hostile climate towards minorities in the largely Buddhist country drew him in a different direction. “The government didn’t seem to be doing anything about it. That’s why I started a legal aid group for Muslim victims of hatred and violence in 2012.’ Then in 2019 came the Islamic suicide attacks, resulting in many deaths and injuries. “From that moment on you could do whatever you wanted with a Muslim, nobody cared,” Hizbullah says. ‘I spoke out about it. As a lawyer, I opposed the headscarf ban in certain schools. During corona, I fought a law that mandated, without medical necessity, cremation of corona dead.’

A case against electoral fraud made Hizbullah unpopular with those in power. ‘I got signals: you are a target. But I hadn’t done anything wrong and didn’t think they would be so wrong and stupid to arrest me.’

Unfortunately – on April 14, 2020, people who said they were from public health called: if they could come by. ‘I thought it had to do with corona. But they turned out to link me to the attacks in 2019. I told them that I had known two of the terrorists because I had assisted their families in real estate matters – nothing more. I had to make a statement the next day.’

When Hizbullah did, he was arrested. ‘I only got to see a judge after ten months. Under the anti-terrorism law they could detain someone for a year and a half without charge, but that has now been reduced to a year.’

It was, Hizbullah says, a bizarre time. “I didn’t know why I was stuck. When I made a statement, they made up a story around it. Unlike many others, I did not experience any verbal or physical abuse, but I spent a lot of time alone in a cell. Weeks went by when I didn’t see the sun. The food was bad. After ten months I went to a prison where conditions were better.’

What kept him going? “First of all, the thought that I was innocent. They said: your life is over, the judge will lock you up, but I kept saying: no, not everyone will believe your lies. The second was that I was talked about publicly, in parliament, at a UNHCR session in Geneva, by NGOs. The message I want to pass along: keep calling someone’s name and keep their story alive, it gives so much strength. They can hold you during the whole process, which can take 15 years. But thanks to international pressure, I was released on bail.”

There is now an indictment: Hizbullah is said to have told a school in 2018 that Muslims should attack Catholics. ‘I haven’t even been to that school and the witness they bring up hasn’t said what they claim at all. It’s a no-brainer, a responsible officer would revoke it. But they don’t, and that worries me.’

What is wrong in Sri Lanka, that something like this can happen? “It’s about power. By framing Muslims as threats, as terrorists, they can say: vote for me, I will defeat them. I use my criminal case to open people’s eyes to that.’

After this interview, on August 24, there was to be another hearing in Hizbullah’s case. But it was postponed: the Public Prosecution Service was not ready. Hizbulla writes: ‘Now that I’m out on bail, it doesn’t bother me very much. But such delays are a terrible blow to incarcerated suspects and their families.”