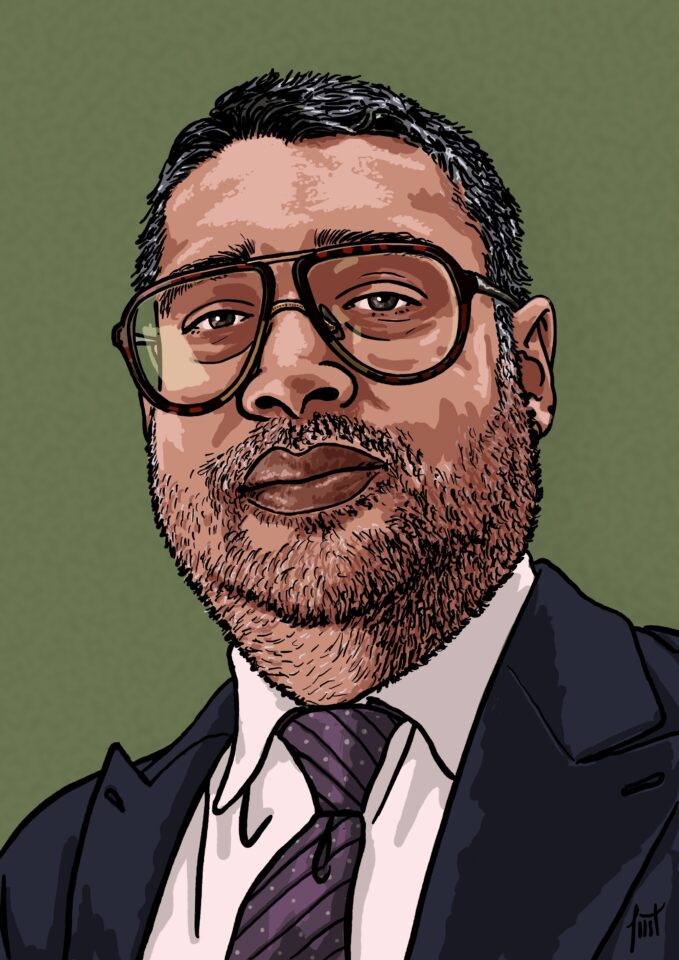 Malaysian environmental human rights lawyer Charles Hector Fernandez was one of the speakers at the Lawyers for Lawyers seminar on environmental justice and the work of environmental lawyers. Fernandez has been in the news several times in recent years, including internationally, because of cases in which he represented clients against large corporations. Trade agreements are the big problem in dealing with large corporations, Fernandez said. New legislation is needed for that.

Fernandez was in the news last year because two major logging companies, Beijing Million and Rosa Timber & Trading, had sued him and his clients for “contempt of court”. Both companies had been granted permits for logging in the Jerantut Permanent Forest Reserve. Fernandez represented eight villagers who live near the reserve and believed that their interests would be harmed by the large-scale logging. Now, a “reserve” in Malaysia does not mean that the entire area consists of protected nature, but that there are also parts reserved for forestry and mining. The individuals Fernandez represented believed that the proposed activities would cause a serious infringement on their living environment, including in terms of water quality, traffic intensity, and on nature itself. Fernandez was not the one who had initiated the proceedings, as he had later stepped in as the second lawyer of the villagers. “The problem was that you really should have sued the responsible government agency that issues the permits. But that had not been done in the past by the first lawyer. You can ask yourself, of course, whether at the time he was deliberately pressured by the stakeholders to sue the companies themselves, hoping that he would then not have a great chance of success.”

After Fernandez requested information from an agency regarding an answer provided to the plaintiffs several years ago, the two forestry companies saw reason to sue him and the persons he represented for “contempt of court” in 2021. The case received both national and international attention, and the two companies finally dropped the charges against him in April 2021. The logging license for these companies was also revoked. Fernandez: “This does not mean that the proposed logging is now off the table. All the machinery is still in place, and there is a good chance that these or other companies will be licensed at a later stage, when the storm has died down. Don’t forget that some of the clients I represented in this were local administrators who were members of the governing parties. You can imagine the pressure they have been under.”

The Malaysian judiciary is in itself independent, Fernandez said, adding that it is of course possible that a judge may make a mistake. The rights of lawyers are also guaranteed. The Malaysian Bar Association is a strong and influential organization, with a large number of lawyers known nationwide. Fernandez emphasizes that support from the Bar Association in environmental cases is crucial. The problem, according to Fernandez, is in government organizations, which for whatever reason pay too much mind to the interests of large corporations. “Sometimes government agencies, which issue permits, are again a part of a higher organization, without being regulated themselves. Paradoxically, this means that they are not responsible for the permits that they themselves have issued. And then you have the problem of not being able to sue them.”

Another problem is the attitude of the police. “A group of residents in a village objected the placement of a heavy vehicle (an excavator) in front of their homes, when it could have been placed 200 further at the edge of the forest. The police called them to let them know that they could come to the police station to talk about this. On arrival they were arrested for causing trouble. Their fingerprints were taken and DNA was taken without their consent. This attitude of the police will have to change.” Fernandez himself does not fear for his freedom. “The independent position of the legal profession is clearly regulated. In addition, I have been active in the field of human rights for years, I know how to act. Moreover, I feel supported by the Malaysian Bar Association. So I am not afraid of repercussions.”

Fernandez has noticed that citizens have become more assertive in recent years, leading to an increase in the number of lawsuits related to environmental issues and permits. “In addition, you see that the media is becoming more and more interested in this, and consequently report extensively on such matters.” This, according to Fernandez, is one reason why companies sometimes drop charges. “That was what happened in an earlier case that I had brought on behalf of clients in 2011 against the Japanese company Asahi Kosie. That concerned the rights of workers who were working for this company through an intermediary company. Asahi Kosie denied responsibility and sued me for defamation and demanded some three million US dollars in damages. This generated so much negative reaction for the company, even from other companies who were afraid that the attention might also be directed at them, that Asahi Kosie proposed to settle the case out of court. In doing so, I had to pay a symbolic compensation of about two US dollars. That shows what media attention can mean.”

The big issue environmental lawyers are being confronted with are the international or bilateral trade agreements, which are increasingly being concluded. Large corporations invoke them, while national laws fall short of closing the loopholes in those agreements. By invoking those treaties, they hope activists and lawyers will be discouraged from filing cases. For Fernandez, revising national environmental legislation is urgent. The options now available to both companies and citizens need to be more clearly defined. This will give lawyers more tools to act. “You always see that legislation lags behind social developments. Ultimately, it is the people who decide what new laws should be passed and what they should look like. But that can take a while.”

This interview was originally published in Dutch by the Amsterdam Balie Bulletin. Lawyers for Lawyers received permission to post the English version of the interview on our website.