Home » News » Czarina Musni struggles for justice in the Philippines 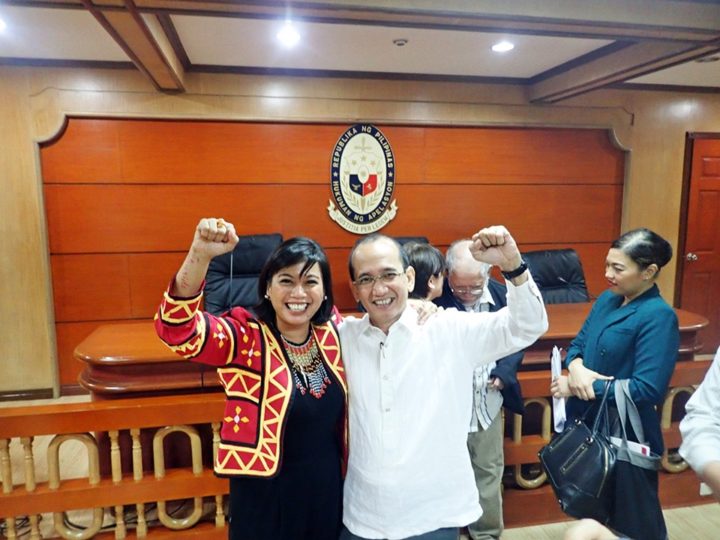 Czarina Musni struggles for justice in the Philippines

The UN Human Rights Council recently adopted a resolution which expresses great concern on the human rights situation in the Philippines. In particular with regard to the reported extrajudicial killings and violations targeting critics and human rights defenders, including lawyers. ,,Today, being a lawyer for the defenseless makes you a target”, responded Edre U. Olalia, president of the National Union of Peoples Lawyers of the Philippines.

One of his brave fellow fighters is Czarina Musni, also a member of the Union of People’s Lawyers in Mindanao (UPLM): ,,We welcome the UN resolution to investigate the rampant and numerous killings in the Philippines, as well as the incidents of extra-judicial killings of activists, peasant and indigenous peoples leaders and human rights defenders”, she says in an online interview with Lawyers for Lawyers. ,,This would show the world how the regime uses brute force, power and influence to silence his critics.”

We shall not falter

She outlines the current deterrent situation: ,,As lawyers we face constant threats and vilification for the human right cases we handle. Because of their demands, our clients are tagged as ‘terrorists’, as ‘communists’, or as ‘enemies of the state’.  And so are we, their lawyers. But we take these branding as our badges of valor, as we stand with and for the Filipino masses who call for justice and equality.”

And she continues without self-censorship: ,,We shall not be intimidated. We shall not falter. We shall go forth and defend our clients. Even if we have to do so to the death.”

The resolution requests the High Commissioner for Human Rights (OHCHR) to provide a detailed report on the situation of human rights in the Philippines. What should be in that report?

,,First of all it is crucial to put into context the political and economic situation before and during the Duterte administration in order to understand what is really going on.

With respect to the War on Drugs, it may be enlightening to show how the drug trade works. Let’s face  that the victims are the peddlers, the ones who sell a number of sachets/packs of drugs in small quantities and who come from the poorest of the poor. The drug lords, the suppliers, the financers are never caught.  So, de facto it is a war against the poor Filipinos.

The report should also make clear why there are activists and what they are fighting for. For instance, why do the peasants and the indigenous peoples march to the streets and stage a rally before government agencies and private companies? Could it be that the peasants are deprived of land by multinational agricultural companies? Is it because the indigenous peoples only want to exercise their right to self determination in their ancestral domains and protect these from development aggression such as mining, dams, ecotourism and corporate plantations? Why do the workers rally for an across the board salary increase and humane working conditions? Instead of acknowledging that they are merely exercising their rights and freedoms under a democratic state, the government unleashes its armed forces against them.”

How do the attacks on lawyers also impact judges, prosecuters and lawyers’ work?

,,These tactics come in the form of red-tagging, public villification, smear campaigns, surveillance, harrasments and worse, assasination of our colleagues. In our hearings, we notice suspicious persons taking photos and notes and looking at us intently. As for the judges and prosecutors, they also get the feeling of being ‘watched’ as to how they handle our cases that are lodged before them, which strongly effects the way they do their work.”

You lost a colleague, Bejamin Ramon, at the age of 56 and father of  three children

,,His legacy inspires young lawyers like myself to fight the good fight. His daughter has recently become a lawyer herself and she has pledged to continue her father’s legacy of lawyering for the poor and the oppressed. To know that Ben Ramos was killed because of his work causes alarm and worry for us. But  his death also sheds light to our moral compasses in deciding which battles to fight. And we choose to fight those battles against oppression, repression and injustice.”

What role can Lawyers for Lawyers play ?

,,It is of great value for us that Lawyers for Lawyers propagates that countries such as the Philippines harsh realities of inequality and injustices prevail. Conditions which require, nay, demand, international consolidated action.

We are perpetually grateful that international organizations like yours stand in solidarity with us. The support that you extend to us adds fuel to our passion to continue the work that we do, and gives us courage to go on, knowing that we are not alone. As Atty. Romeo T. Capulong, the founding chairperson of the National Union of Peoples Lawyers, once said: ‘We have brave clients. They deserve brave lawyers.’”