Home » News » Advertisements on the deteriorating situation of lawyers in Turkey 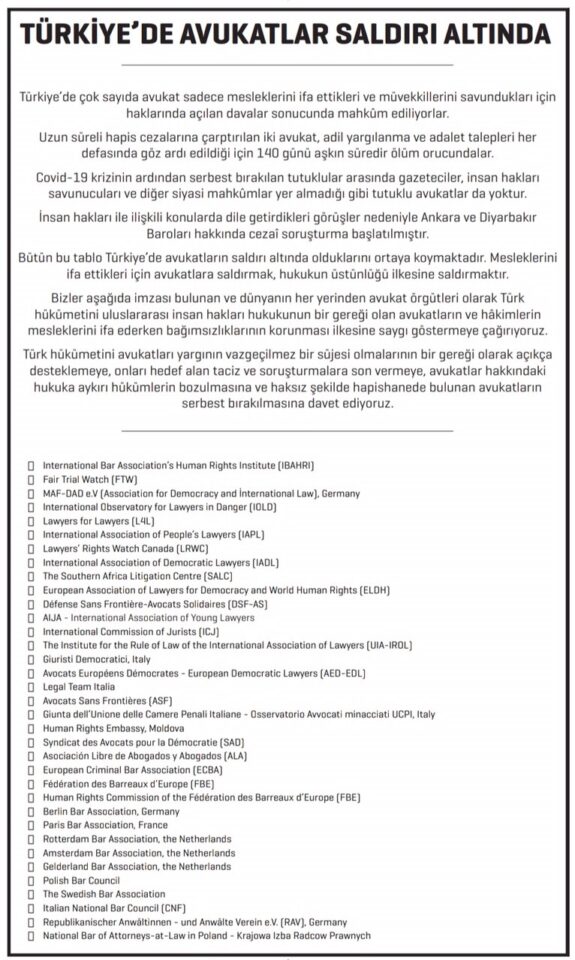 On 24 June Lawyers for Lawyers together with 34 bar associations and lawyers’ organizations, published an advertisement in the newspapers BirGün and Yeni Yaşam to draw attention to the deteriorating situation of lawyers in Turkey.

The English-language text of the advertisement reads as follows:

LAWYERS UNDER ATTACK IN TURKEY

Lawyers in Turkey are being prosecuted and convicted in large numbers for simply doing their job and defending their clients.

Two lawyers, sentenced to lengthy prison sentences, have been on hunger strike for well over 100 days, asking for a fair trial and justice for all, because every other time they asked they were ignored.

Imprisoned lawyers were left out of the group of prisoners being released following the start of the COVID 19-crisis, as were journalists, human rights defenders and other political prisoners.

The Bar Associations of Ankara and Diyarbakır are under investigation for expressing their opinion on human rights matters.

All these issues show that lawyers in Turkey are under attack. An attack on lawyers for doing their job is an attack on the rule of law.

We, the undersigned lawyers organisations from all over the world, call on the Turkish government to respect the independence of lawyers and judges in performing their professional duties, as international human rights law requires.

We urge the Turkish government to publicly support lawyers as essential agents in the administration of justice, to stop harassing and prosecuting them, to reverse unlawful convictions and to release the unjustly detained from prison.