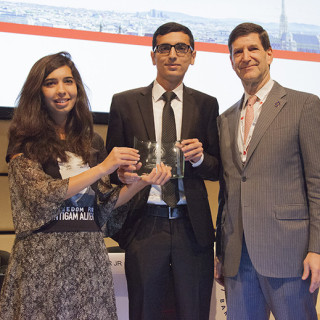 Intigam Aliyev was sentenced in April 2015, on charges of “tax evasion”, “abuse of authority”, “illegal entrepreneurship”, and “appropriation”. Aliyev denies all the charges and says they are politically motivated. His arrest and conviction appear to be related to his work. As a lawyer, he has submitted more than 200 applications to the European Court of Human Rights.

The Award, granted to Initam Aliyev in honour of his dedicated fight to uphold human rights and the rule of law in Azerbaijan, was presented by IBA President, David W Rivkin, on the final day of the 2015 IBA Annual Conference. Aliye’s son and daughter travelled to Vienna and collected the Award on his behalf (picture).