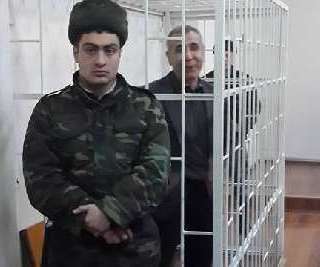 On 23 January 2015, Intigam Aliyev’s lawyer requested in a preparatory meeting before the Criminal Court in Baku to terminate the criminal proceedings against his client. The Court rejected this request and all other applications of the defense. The case has been postponed till 3 February when the date of the first hearing will be set. During the meeting, Aliyev was kept in a cage and not allowed to sit with his lawyers (picture).

Intigam Aliyev was arrested on 8 August 2014 on charges of tax evasion, illegal enterprise, and abuse of official power and sent to pre-trial detention. Aliyev denies all charges, and says they are politically motivated.

His arrest is apparently work related. As a lawyer, Aliyev has submitted more than 200 applications to the European Court of Human Rights. Around 40 cases are currently awaiting decision.

Lawyers for Lawyers and the Law Society of England and Wales called upon the authorities of Azerbaijan to immediately and unconditionally release Aliyev from pre-trial detention and to drop the charges against him.