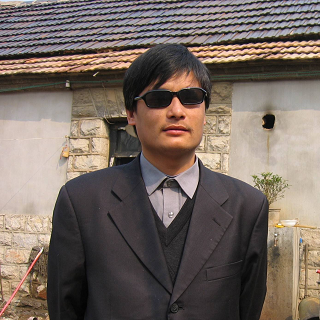 Chen Guangcheng is a blind self-made lawyer and a human rights activist. In 2005  he helped villagers to start legal proceedings against the local authorities of Linyi City who, as part of the one-child policy, had forced thousands of women to have abortions and sterilisations, in violation of national Chinese law. After this case, Guangcheng was arrested and sentenced to four years in jail. After serving this term, Guangcheng was released as early September 2010. Since his release Guangcheng and his family have been kept under house arrest and his house is being watched.

In February 2011 Guangcheng had published a video to share his and his family’s living conditions with the world. This video can be watched on the  L4L YouTube channel. In response to the publication of this video, he and his wife were severely beaten.

Other organizations also have given renewed attention to the continued house arrest of Guangcheng. Front Line Defenders made a video on the situation of Guangcheng. Click here to view this video.