Home » News » Pu Zhiquang in prison for over 1 year, risks 8 years in prison 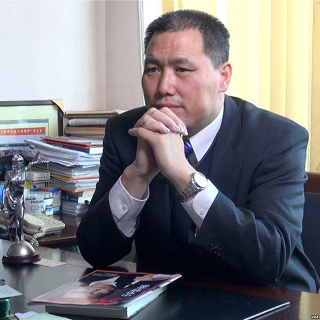 Pu Zhiquang in prison for over 1 year, risks 8 years in prison

On 4 June, the victims who died in the violent repression of the Tiananmen square protests were commemorated in Hong Kong, China. More than a year ago, Chinese human rights lawyer and pioneer of freedom of expression Pu Zhiqiang was arrested after attending a Tiananmen protests commemoration. He has only recently heard he is charged with ‘inciting ethnic hatred’ and ‘picking quarrels and provoking trouble’. Last week, he ended third on the shortlist of the jury of the L4L-Award 2015.

The jury noted that a significant portion of all nominated lawyers is in detention because of their work as a lawyer. This is also true for Pu Zhiqiang since his arrest on May 4, 2014, after attending a meeting where the Tiananmen protests of 1989 were commemorated. The jury stated in particular that his arrest came just a year after he was proclaimed ‘Person of the year in legal affairs’ by the renowned Renwu Magazine. In his work he defended media organisations, journalists, writers and activists in freedom-of-expression cases, which always attracted a lot of media attention. The jury also noted that human rights lawyers must be free to make their legitimate work to support those who are qualified as enemies of the state and that Pu Zhiqiang therefore must be released immediately.

Pu Zhiqiang, born in eastern China in 1965, is a partner at Huayi Law Firm in Beijing. Pu has earned his Bachelor’s in History at Nankai University in 1986 and his LL.M. at the China University of Political Science and Law in 1991. In 2005, Pu at Yale Law School did a comparative study in the field of media and justice. Pu specializes in real estate, insolvency, financing and criminal law, but is mainly known for his cases in the field of freedom of expression. He is the figurehead of a group of Chinese lawyers who take on sensitive cases, such as the defense of individuals who have fallen out of favour within the Communist Party or are harassed by the government. He also defended the artist Ai Weiwei.

For years, Pu has been monitored by the Chinese authorities because of the freedom-of-expression cases he does and because of his political beliefs. In 1989, Pu joined the pro-democracy movement; In 2008, he signed Charter 08, which openly called for bringing about fundamental change in China, as an independent legal system, freedom of association, and the abolition of one-party rule. Following the publication of Charter 08 Pu Zhiqiang was summoned to report to the police, as well as after the announcement of the award of Nobel Peace Prize to Liu Xiaobo.

Since the authorities violently beat down the Tiananmen protests on 4 June 1989, reportedly resulting in hundreds of deaths, Pu Zhiqiang commemorated the victims every year. In 2006, Pu Zhiqiang was arrested to prevent him from attending a commemoration of the Tiananmen protests. This year, he sent a text message to his friends asking them to join him the next day to commemorate the protests. The police called him at 1 o’clock in the night, and then again at 10:20 am, after which he was arrested and interrogated all day.

He is still in custody. Only in early May 2015, a year after his arrest, he learned what he is being charged with by the court in Beijing. The charges are ‘inciting ethnic hatred’ and ‘picking quarrels and provoking trouble’, following a number of messages from Pu social media platform Weibo. According to his lawyer Pu risks being sentenced to eight years in prison.

The L4L Award was awarded to the Colombian lawyer Jorge Molano, who received the award on May 29, 2015 at a seminar entitled ‘Lawyers are not their clients’ at the offices of NautaDutilh in Amsterdam.

Lawyers for Lawyers is concerned about the revocation of the legal practicing licenses of lawyers Yang Bin and Chang Weiping from China. Both lawyers are known to have taken on politically sensitive cases. Human rights lawyer Yang Bins’ legal practicing

Two years ago, on the 28th of February 2019, Chinese lawyer Jiang Tianyong was officially released from prison after serving a two-year prison sentence for ‘inciting subversion of state power’. However, since his release, Mr Jiang has been kept under