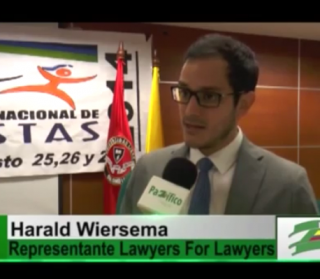 This year, like in 2010 and 2012, Lawyers for Lawyers again participated in the Caravana Internacional de Juristas (Caravana). From 23-30 August, Wout Albers and Harald Wiersema visited Colombia together as part of a group consisting of 70 lawyers and judges. The Caravana is organized from London in cooperation with local Colombian lawyers. One of the main goals is to increase the visibility of the work of Colombian human rights lawyers. To achieve this goal, the participants travelled to Bogota and seven other regions in Colombia (Bucaramanga, Buenaventura, Cali, Cartagena, Medellin, Pasto and Santa Marta) to speak with judges, lawyers and their clients on the one hand, and on the other hand with other authorities such as public prosecutors, embassies and ministries. During these conversations, recurring themes were general problems with access to justice, the causes of these problems and possible solutions. In addition, discussions focused on the specific position of lawyers and human rights defenders, often on the basis of individual cases of threatened or murdered lawyers.

The press release of the Caravana (which you can find here) states that despite the existence of the Unidad Nacional de Protección and the precautionary measures provided to human rights lawyers and defenders, many of those at risk receive inappropriate or no protection. Particularly the conditions for human rights lawyers in Calí, Valle de Cauca and Bolívar are dire and many lawyers have been killed since the first Caravana in 2010. In general, human rights defenders continue to suffer obstruction through threats, attacks and surveillance. The continued stigmatization of human rights defenders and attempts to discredit their work by accusations of rebellion and false allegations of corruption and judicial fraud is concerning.

A report on the findings of the mission will be published later this year. The Caravana 2014 was covered in the Colombian media several times (see for instance here and here).