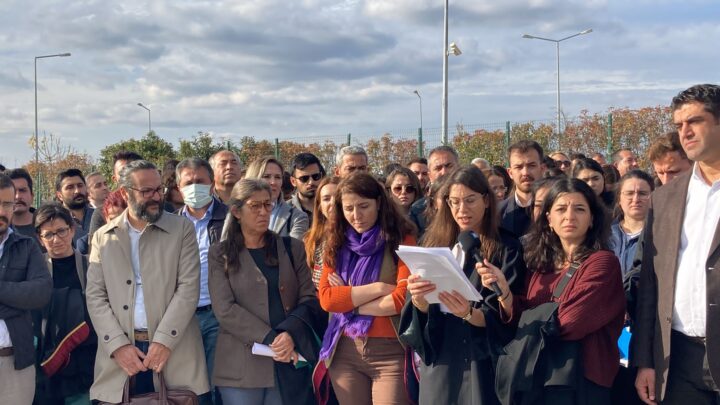 This week, we – more than 60 lawyers from 9 countries representing more than 30 bar associations, NGOs and professional lawyers’ associations – have been observing the final hearings in the mass trial that started in 2013 against 22 lawyers from the ÇHD (Progressive Lawyers Association) and the HHB (People’s Law Office). There are now only 21 left, as Ebru Timtik died – hunger-striking for a fair trial – in the course of these proceedings.

Today, these lawyers have been convicted on charges of membership in a terrorist organization and participating in terrorist propaganda, and lengthy prison sentences have been imposed.

These convictions and sentences are in total violation of the right to a fair trial, the U.N. Basic Principles on the Role of Lawyers and the rule of law.

The only material facts brought to the Court were strictly linked to the defendants’ professional activities as lawyers in the field of human rights: taking part in a press conference, being present in or near a protest, advising clients of their right to remain silent, defending suspects charged with terrorism, etc. During the inquiry, some of the accused lawyers were subjected to wiretapping for over a year, in an apparent violation of the sanctity of legal professional privilege.

The U.N. Basic Principles specifically guarantee the right of lawyers to participate in public debate and to associate with each other and, further, state that lawyers must never be identified with their clients or their clients’ causes, nor suffer prosecution for any action in accordance with their professional duties.

Moreover, our colleagues were deprived of their right to a fair trial. Their request for sufficient time to present their defence was denied by the Court, which allowed only five short days of hearings for 21 defendants, and rejected the defendants’ request to postpone the hearing in order to permit a proper examination of the evidence, in particular electronic documents the authenticity of which is seriously questioned.

The trial was held in a courtroom at Silivri prison, with heavy police presence. The defendants were separated from their lawyers by two lines of police officers, hindering the ability of the defendants and their lawyers to communicate with confidentiality.

The defendants’ rights were also violated by the failure to complete proceedings within a reasonable time, as the trial has been ongoing for ten years without a proper justification for the protracted proceedings.

In addition, for several of the defendants, this trial relies on facts and evidence that have already been used in the 2017 trial against seven of the same defendants, in violation of the principle that no one should be tried twice for the same offense.

We are always proud to stand in solidarity with our courageous colleagues, and we once again demand their immediate release.

The world is watching.

On 19 October 2022, representatives of Lawyers for Lawyers observed the third hearing in the trial of lawyer Berrak Çağlar who is accused of being a member of an armed terrorist organization, after expressing solidarity with her imprisoned colleague lawyers