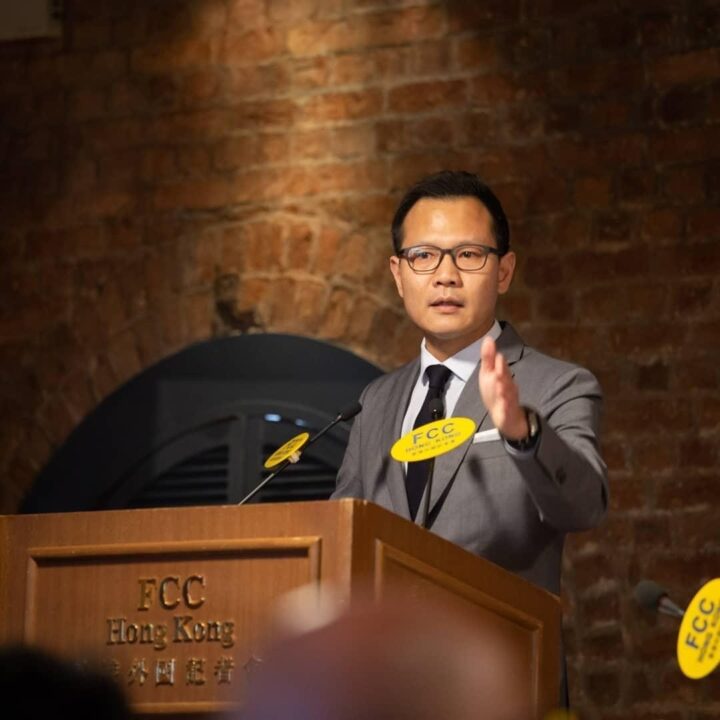 Everyone should subject their relations with Hong Kong and China to a risk analysis, says Dennis Kwok. The repression in Hong Kong is only a symptom of the new style of China’s politics.

Peace of mind is hard to find for Hong Kong lawyer and former parliamentarian Dennis Kwok. He left Hong Kong in 2021 and is currently safe in the United States, but many of his colleagues from his home country have been disbarred or imprisoned. Sometimes for assisting clients in politically sensitive cases, often also because of their commitment to democracy and freedom.

“Hong Kong has a long tradition of lawyers who have been active as civic leaders and politicians,” Kwok said in a video call from his new hometown, where he works as a lawyer and senior fellow at Harvard University. “I know at least fifteen or twenty of the lawyers who are now detained in Hong Kong. They are treated as terrorists and are not released on bail. Their pre-trial detention can last for years.” Not to mention lawyers in China: “If you take up a case in China that the state doesn’t like, you can be subjected to enforced disappearance and be beaten (to death), tortured, and poisoned.

‘China’s influence is not yet very noticeable in these areas. But the society they live in has turned into what, without exaggeration, could be called a police state. Government and police can do what they want, the independent judiciary has disappeared.’

What did Kwok expect when the British transferred the sovereignty over Hong Kong to China in 1997 – a country where fundamental freedoms were already not guaranteed back then.

“I was still a student, and did not totally grasp it. But the way it is now was certainly not the intention.” It looked neat on paper at the time: the choice was made for ‘one country, two systems’. Hong Kong would receive a lot of autonomy and China would come up with a political reform plan that would provide for general elections in Hong Kong.

That reform plan came in 2014: China would nominate the electoral candidates from which Hong Kong could choose. “The world has been naive,” Kwok says. He recently wrote a website article on the topic with the title “The Inevitable End of “One Country, Two Systems”’. The idea that China’s move to capitalism would eventually lead to democracy has turned out to be an illusion. Also, Kwok writes, the experiences in Hong Kong teach us that freedom is untenable without democratic governance.

The Hong Kong Bar Association is now under enormous pressure. Kwok: “They have always been very outspoken against authoritarianism and draconian laws, but have been told their status will be taken away if they continue to do so. There is complete silence now.”

In particular, the Hong Kong National Security Act that was introduced in Hong Kong in 2020 has major implications. The law imposes severe penalties for vaguely worded offenses including subversion of the state, separatism, terrorism or collusion with foreign powers. “China’s politics have fundamentally changed under Xi Jinping,” Kwok says. “It is based on aggressive nationalism, comparable to Europe in the 1930s. The situation in Hong Kong is merely a symptom of that.”

Foreign companies and NGOs that deal with China or Hong Kong should make a new risk analysis, according to Kwok. “Whoever does business with a Chinese company is in fact doing business with the state. You may be dealing with data transfer, while it is subject to very strict rules. Or you have a choice of forum for Hong Kong in a contract. You really have to look very carefully at that. And don’t expect local lawyers to dare to provide you with independent and honest advice, because everything they say or write can be read by the state. Privacy does not exist in China.”

Kwok is in the process of setting up a multidisciplinary think tank in the US that will map the risks of the new Chinese politics. “The world should not be naive, there is a big change going on. I think people will only realize how deranged it is in a few years.”

This interview was originally published in Dutch in the Advocatenblad and is written by Trudeke Sillevis Smitt. Lawyers for Lawyers received permission to post the English version of the interview on our website.