Home » News » L4L and FTW in Istanbul for hearings 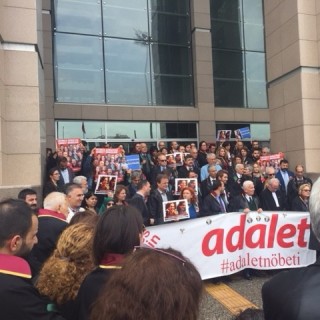 L4L and FTW in Istanbul for hearings

On 10 May 2018, three hearings were held in Istanbul in cases against lawyers that are suspected of terrorism-related crimes: the KCK-case, the ŐHD-case, and a new case (Cizre-protest). Representatives of Lawyers for Lawyers (L4L) and Fair Trial Watch observed two of those hearings, together with observers from the United Kingdom, Norway, France, Germany, Switzerland, Italy and Spain. They were accompanied by Nardy Desloover, ex-president of the Rotterdam Bar Association, who represented the Dutch Bar Associations.

Since the attempted coup in July 2016, 1.539 lawyers have been persecuted in Turkey. 580 Lawyers have been arrested and 103 lawyers have been sentenced to imprisonment, all for terrorism-related charges (Source: “Incarceration of Turkish lawyers | En masse arrests and convictions”, The Arrested Lawyers Initiative, April 2018, see www.arrestedlawyers.org). Many lawyers are defendants in more than one case.

From conversations with lawyers and organizations in Istanbul, the observers learned that the situation of lawyers in Turkey is still very difficult. All accused and detained lawyers are obviously severely hindered in defending their clients. The accusations and the arrests also have a chilling effect on other lawyers.

The first hearing was the 16thhearing in the KCK-case (ˈKCK Lawyers Trialˈ): the case that started with the arrest of 46 lawyers in November 2011 and is still pending in court. The accused lawyers all represented PKK-leader Abdullah Őcalan and are charged with membership of a terrorist organization and terrorism-related activities. Some of the lawyers had been in pre-trial detention for almost 2,5 years.

Only 5 defendants were present. The lawyers pointed out multiple irregularities they found in the files of currently persecuted judges, prosecutors and police officers (previously involved in their case) that were added to their file on the lawyersˈrequest. They asked the court to investigate this. The case has been postponed until 30 October 2018.

The second hearing was in a new case, in which 18 lawyers are on trial for organizing a demonstration on 15 September 2015 and reading a press statement protesting the curfews in Cizre in South-East Turkey, that left residents without access to emergency health care, food or water. They are accused of terrorist propaganda and violating article 32 of law 2911, that prohibits unpermitted demonstrations. Three of these lawyers are in pre-trial detention for other cases, the other defendants are not in prison at the moment.

The defence stipulated that the right to freedom of expression, assembly and demonstration also applies to lawyers, so the charges should be dismissed. Also, it was argued that the procedural rights of the defendants were violated. The prosecutor did not obtain permission from the Ministry of Justice to indict the lawyers, although this is legally required. Furthermore, two of the detained lawyers were heard through videoconferencing, and not in court, which was strongly objected by one of them. The other defendants supported her objection by refusing to give a statement until the detained defendants would be able to be present in court as well.

The defence requested to adjourn the case in order to enable the presence of all detained lawyers at the next hearing, so they can be heard in person. This request was granted: the case was postponed until 8 November 2018.

The third hearing was in the case of 9 lawyers, accused of membership of a terrorist organization for activities such as visiting clients in prison, filing complaints before the European Court of Human Rights and contacts with international organisations. This was the 8thhearing in this case.

The representatives of L4L and Fair Trial Watch were not able to attend this hearing, since it was at the same time as the others. We understand that one of the accused lawyers made a statement. The case was postponed until 6 September 2018. At this hearing, the defence will submit their demands on the merit of the case.

L4L and Fair and Trial Watch are obviously still very concerned about the situation of lawyers in Turkey and will keep on monitoring cases against them closely.

The International Commission of Jurists, the Amsterdam Bar Association, Lawyers for Lawyers and Judges for Judges are organizing an online round table discussion on the security and independence of the lawyers and judges in modern Turkey on 5 October 2021