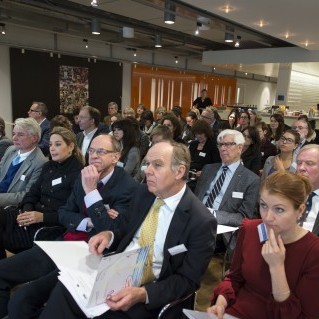 On the 10th of December Kennedy Van der Laan organized an event on Human Rights Day 2012, together with the Dutch foundations Lawyers for Lawyers and Judges for Judges.

The theme of this day was “the independence of judges, lawyers and prosecutors guaranteed” and sprouted from the idea of the Special Rapporteur, Gabriela Knaul,on the Independence of Judges and Lawyers, to bring together the three different legal professions for the first time, in an effort to exchange experiences.

Dr Frederiek de Vlaming – foundingmother of Lawyers for Lawyers was the moderator of the day, which consisted of two parts. The first part, a public event, included Gabriela Knaul as keynote speaker, as well as Germ Kemper (Dean of the Amsterdam Bar Association), Gerritjan van Oven (President Judges for Judges) and Phon van den Biesen (Presidents Lawyers for Lawyers). Frederiek de Vlaming also interviewd a Russian Lawyer who has been in temporary shelter in the Netherlands, for the politically sensitive cases he takes up.

After an introduction on the subject, the organizations and the work of the Special Rapporteur, the event continued into discussing ways in which colleagues abroad who are threatened in their independence can be helped. Another topic that was discussed was how such work can assist the mandate of the Special Rapporteur. In this vein, Peter Ingelse (President of the Enterprise Chamber of the Amsterdam Court of Appeal) and Alice Krispijn, (Attorney at Law at Kennedy Van der Laan) shared their experiences of their mission to Colombia last August. The report of this mission will be presented to Gabriela Knaul in the beginning of 2013.

Diner pensant
The public event was followed by a unique diner pensant with a select group of experts, to continue discussing these important topics, and exchanging views between the three groups. Apart from the guest speakers of the public event, Mr Geert Corstens (President of the Supreme Court of the Netherlands), Derk Kuipers (Secretary-general of the Intertational Association of Prosecutors) and Karen Brewer (secretary-general of the commonwealth association of magistrates and judges) also joined the dinner. Possible cooperation for fact-finding missions was explored, and a fierce debate was provoked by public prosecutor Ward Ferdinandusse, questioning if judges shouldn’t be subject to the same background check by the Dutch CIA as prosecutors are.
It was a very successful day, with many fruitful discussions, with Human Rights Day 2012 being successfully concluded.
vorige    |   volgende