Home » News » These lawyers must not be forgotten! 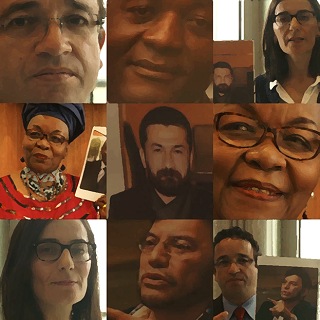 These lawyers must not be forgotten!

Three lawyers from Turkey, Cameroon and Colombia ask attention for their colleagues who face difficulties in exercising their profession as a lawyer. These lawyers should not be forgotten! On the day of the L4L-Award seminar ‘Lawyers are not their clients‘, Jacqueline van Vugt made a short film of the calls for attention by these three lawyers.

L4L-Award laureate Jorge Molano asks support for his colleague José Humberto Torres. José Humberto Torres works as as lawyer in the city of Barranquilla in the northern part of Colombia. For more than 30 years he has been defending victims of human rights violations on behalf of the Foundation Fundación Comité de Solidaridad con los Presos Políticos (FCSPP). Torres was involved in the case against Jorge Noguera, former director of the Colombian Intelligence Agency DAS, for his involvement in the assassination of professor Alfredo Correa de Andreis. He participated in cases against various army leaders for alleged human rights violations (extrajudicial killings). Due to his work Torres has been regularly victim of threats and has even fled the country two times.

Alice Nkom speaks about her colleague Michel Togué. In Cameroon, gay hate is deeply rooted in society as a consequence of traditional culture and superstition. Of the more than two thousand lawyers in Cameroon, Michel Togué and Alice Nkom are the only two who are prepared to represent people who are suspected of having a same sex relationship. Since October 2012, Michel Togué has received many death threats because of this fact. The threats are of such a degree that Togué has applied for political asylum for his wife and children in the United States. He himself will continue his practice in Cameroon, to contribute to the necessary change in his country.

Ayse Bingol asks attention for her colleague and the President of the Tunceli Bar Association, Uğur Yeşiltepe. He was sentenced to 6 years and 3 months of imprisonment for his alleged membership of the outlawed Maoist Communist Party (MKP). In the indictment, prosecutors alleged that Yeşiltepe was engaged in terrorist activity during legal rallies in the eastern province of Tunceli. One of the pieces of evidence against the bar president was a verbal exchange with police during a press statement regarding one of Yeşiltepe’s clients, who was sentenced to 56 years in jail for shouting slogans commemorating İbrahim Kaypakkaya, a Maoist leader who was tortured and killed by security forces in 1973.

Myanmar, Colombia, China: joint oral statement during the id on the UPR