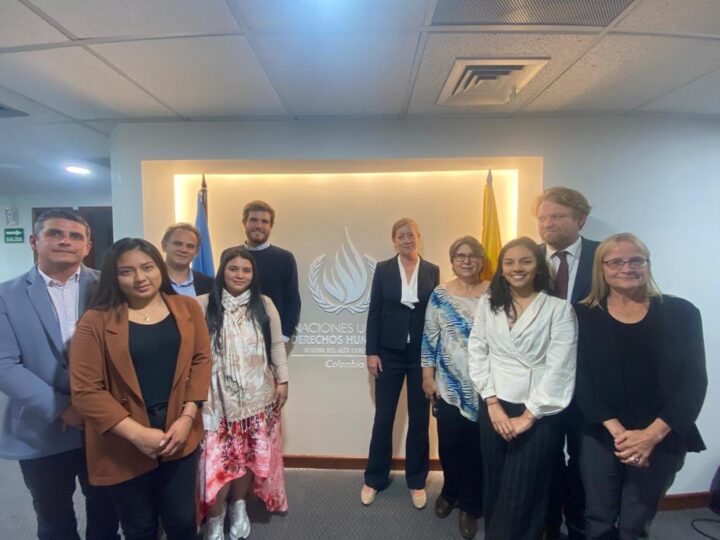 At the invitation of Colombian lawyers and human rights activists, the International Caravana of Lawyers, an international fact-finding mission, visited Colombia from 21 to 28 August. During the mission, an international delegation, including Wout Albers from Lawyers for Lawyers, held talks with lawyers, victims of human rights violations and people from the judiciary. The first conclusion: the situation of lawyers in Colombia is still very worrying, but there is hope for improvement with the new left-wing government.

Due to the corona crisis, there have been four years between the sixth and seventh Caravana. These four years cover the entire period of former President Duque’s government. Lawyers, judges and the rule of law all suffered setbacks under his leadership. Since last August, a leftist government led by President Gustavo Petro was elected for the first time in Colombia. Albers: “Many Colombians draw hope from this and hope for an improvement in the overall situation in the country.”

For now, the situation of lawyers remains very concerning. In the Caravana’s initial conclusions, the mission raised concerns about the eavesdropping of telephone conversations of lawyers and their clients by the government, the stigmatisation of the work of lawyers by identifying lawyers with their clients, the criminalisation of human rights defenders, lawyers and judges and the lack of adequate protection measures at both the individual and collective level.

In Cartagena, the Caravana spoke to lawyer Adil Meléndez who is under threat because of his work as a lawyer in the Canal del Dique case. This involves a project where the government wants to reroute a canal to prevent flooding, but this would have a major impact on the Afro-Colombian community because their area will flood as a consequence. No compensation is being offered from the government. Albers: “Meléndez is assisting the indigenous group and has ensured that the project has now been halted. Because of his involvement as a lawyer, he is under serious threat, and even threatened with the death. We are very concerned about Meléndez’s situation as he is at a constant risk. That is why we lobbied the Unidad Nacional de Protección (National Protection Unit) to scale up his security from light to high measures, which demands an armoured and blinded car in addition to a bodyguard.”

Other lawyers in Cartagena are also experiencing difficulties. Lawyer Eduardo Cantillo is being prosecuted in connection with a case he worked on in the 1990s. He is falsely accused of fraud and has been sentenced to seven years in prison just for doing his job. Interesting is that interviews with judges revealed that several judges have been sentenced to long prison terms for similar fraud allegations. Albers: “Not only lawyers are experiencing problems, but also judges. We spoke to four judges who are in prison, serving 30-year jail sentences, for a sentence they rendered while serving as judges.” About these cases, as well as Cantillo’s, several local lawyers and judges say that these involve wrongful convictions. The Caravana is concerned about irregularities found in those cases and whether procedures are being followed correctly.

This is also linked to the Colombian Public Prosecutor’s Office (PO). Within the Colombian prosecution, power blocks have been identified with corrupt officials. No major change is to be expected within the prosecutor’s office, even with the new left-wing government, as the power blocks within the prosecutor’s office are settled in the higher ranks and as they were even democratically elected in previous periods. Albers: ‘There is still a lot of corruption within the public prosecutor’s office in Colombia. This is quite a politicised body compared to the Netherlands. Even individuals who do not function well or are corrupt, often stay in office for another four years. These officers are responsible for the persecution lawyers and judges, and with regards of the corruption, this is very concerning and a danger to the rule of law.’

A full report of the mission will later be published on our website.