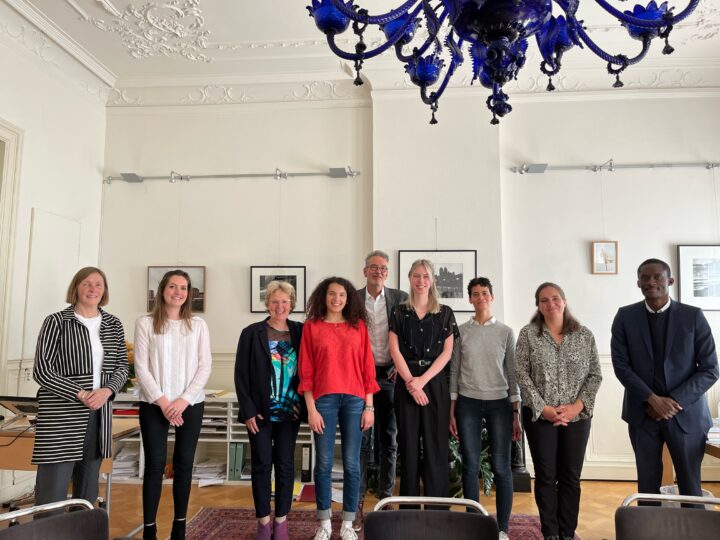 Lawyers in Haïti at risk

In May, Lawyers for Lawyers met with lawyers from Haïti, where the judicial system is disintegrated and lawyers are threatened and killed.

‘In Haiti, armed gangs rule over life and death’, Jacques Letang and Pauline Lecarpentier said at the offices of the Dutch Bar Association in Amsterdam, where they met with Lawyers for Lawyers, Dutch and Detained, Foundation Epafras and the Amsterdam Bar Association (Orde van Advocaten Amsterdam) to discuss the precarious state of human rights and the rule of law in Haiti.

Jacques Letang is a Haitian lawyer and former magistrate, President of the Côteaux Bar Association (Bâtonnier de l’Ordre des avocats des Côteaux), President of the Haitian Bar Federation since 2020 and Chairman of the Human Rights Office in Haiti (le Bureau des Droits Humains en Haïti, hereafter: BDHH). In 2022, Mr Letang received the Franco-German Prize for Human Rights and the Rule of Law. Pauline Lecarpentier is a French jurist who lived in Haiti for several years and co-founded BDHH. She works as its general secretary since 2015.

The Haitian state no longer controls the territory. Armed gangs rule over various areas in the capital and frequently clash with each other. In 2018, the popular neighbourhood of La Saline in Port-au-Prince was the scene of a massacre connected to gang violence, in which dozens of civilians were killed. Since then, the vicious circle of violence and impunity has continued to grow, without any reaction from the political authorities.

‘There is a lack of trust in the judicial system’, Letang and Lecarpentier stressed. The violence and lack of authority have disintegrated Haiti’s judicial system while the conditions of detention continue to deteriorate. Files get lost and people are imprisoned without evidence, often without even being tried, and sometimes for longer than their sentence prescribes. Many suspects are not brought to justice. Take the assassination of former President (Jovenel) Moïse on 7 July 2021, where everything was done to bury the case.

Letang and Lecarpentier explained that this lawlessness affects the professional lives of Haitian lawyers. Violence against lawyers culminated with the brutal killing of Mr (Monferrier) Dorval, the President of the Bar Association of Port-au-Prince, on 28 August 2020. A lawyer usually comes into the danger zone once he or she takes up a case that runs against the interests of a gang, but sometimes lawyers are only targeted for money. Not only human rights lawyers, but also lawyers working on disputes over land or other cases, are threatened, abducted, or assassinated.

Haitian lawyers are forced to take different routes to work every day and to take other precautionary measures. A resolution was recently adopted by the Port-au-Prince Bar Association urging lawyers not to go to the Palais de Justice in Port-au-Prince, as it is located close to La Saline, an area that is now virtually controlled by armed gangs. The bar associations are torn between the need to continue their activities and the need to protect lawyers.

Letang and Lecarpentier continue to work every day to promote respect for human rights and defend the rule of law in Haiti. Together with their colleagues at the BDHH, they have facilitated the release of approximately 200 people from arbitrary detention, supported victims of gender-based violence and dealt with cases of human rights violations such as the La Saline massacre. Another pillar of the BDHH is the training of today’s and future lawyers, as well as human rights advocacy and awareness-raising in close collaboration with victims, artists and the cultural community.

The BDHH is fighting for justice at the national level but also before the inter-American human rights system, which remains an important avenue for achieving justice. The situation in Haiti is alarming and continues to deteriorate, but Letang and Lecarpentier remain hopeful: ‘It is still possible to change people’s lives and have an impact.’