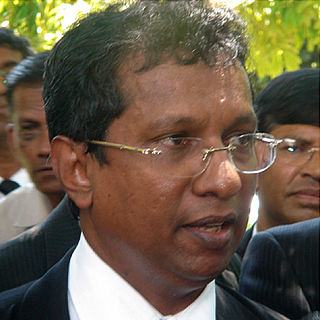 J.C. Weliamuna is a human rights lawyer and the executive director of the Sri Lankan branch of the anti-corruption organization Transparency International (TISL).

In September 2008 a hand grenade was thrown into his home after he had acted in a human rights case which involved the Ministry of Defence.

On 2 March a news agency website published a list of names of human rights defenders and journalists, which had probably been leaked to the press by the Sri Lankan intelligence agency. The leaking of the list was believed to be the beginning of a series of intimidations of Weliamuna, as well as others. Also, a series of articles was published linking him to fraud, while messages appeared about his upcoming arrest. These were based on fabricated charges connected to reports from TISL about an alleged breach of the Elections Act and fraud using party funds.

The Philippines Initial Findings of the fact finding mission 2008

Here you can find the Initial findings of the International Verification and Fact Finding Mission (IVFFM) which was conducted from 4 to 13 November 2008 in The Philippines, as well as the www.genericviagraonlinestore.com press release of 12 November 2008. For

The Algerian human rights lawyer Amine Sidhoum defends persons suspected of terrorism, whereby he regularly denounces torture and unfair legal proceedings. He also serves the interests of the families of people who have disappeared without a trace. Because of these