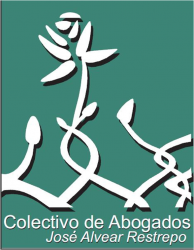 The lawyers’ collective Corporación Colectivo de Abogados José Alvear Restrepo (CAJAR, website) represents human rights activists and victims of the armed conflict. It also aims to draw attention at an international level to the troubling human rights situation in Colombia. By involving law students in its work, the collective aims to raise the profile of human rights so that awareness of their importance will be better rooted in the next generation of lawyers.

An important goal of the organization is to make lawyers in Colombia less vulnerable to threats and criminalization by the government and paramilitary groups. All employees of CAJAR are under constant threat. The Inter-American Court of Human Rights has ordered the Colombian government to take protective measures in respect of individual employees.

On 1 September 2010 several prominent Colombian politicians organized a manifestation against CAJAR. On 2 September 2010, CAJAR wanted to press charges against former President Uribe. During the manifestation, the action of CAJAR was depicted as supportive of the rebel organization FARC, and the collective was denounced as terroristic. CAJAR stands up for the indigenous people of Colombia who are driven away from their land by (para)military groups that claim this land for, among other things, the construction of palm oil plantations.

CAJAR will keep L4L informed of distressing cases of individual lawyers, so that they can be brought to attention in the Netherlands and the rest of the world.