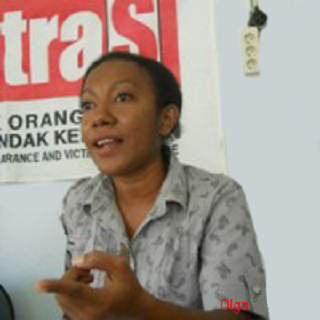 Olga worked for the Papuan Legal Aid Foundation (LBH) from 2005 and the Commission for the Disappeared and Victims of Violence (KontraS Papua) from 2009. L4L regrets to confirm that Olga Hamadi deceased in 2016, which is a great loss for human rights protection and civil society empowerment in Indonesia’s easternmost province.

At LBH, Olga took on politically sensitive cases, concerning mostly indigenous Papuans who were charged with treason for publicly expressing their opinions and being involved in demonstrations. Many of Olga’s clients were arrested without due legal process and were often mistreated or tortured by the police. Among Olga’s clients were KNPB (West Papua National Committee) activists – an organization campaigning for a referendum on the future status of Papua. Of the legal accompaniments, only one case resulted in an acquittal on appeal, whereas all the others resulted in imprisonment on hardly any evidence. Allegedly, the stigma against Papuans influenced these judgments.

Because of the sensitive cases Olga took on against the military, the police and the security forces, she was often monitored and spied upon blatantly whilst working at the KontraS Papua office. KontraS challenges the unprofessional and arbitrary performance of the police force and military, by undertaking media work and complaining directly to the relevant authorities. One of Olga’s  cases had to be discontinued due to intimidation and pressure from security forces. Olga was intimidated by telephone repeatedly, meetings with her clients were obstructed by the security forces and at some political trials psychological pressure was exercised by a huge presence of police, military and security forces. During one case the police incited the community to boycott the lawyers, causing a threatening mob at the Court. The brakes of Olga’s car were cut just before a planned campaign in Australia (in November 2011) about the Papuan human rights situation and in particular the forced dispersal of the Third Papuan People’s Congress. This Congress on upholding the basic rights of Papuans was attended by approximately 5000 Papuans. These intimidations made it difficult for Olga to carry out her work.

L4L organized a letter writing campaign for Olga Hamadi in October 2012. In 2013, she, together with her colleague Gustaf Kawer, ended third on the jury’s shortlist for the Lawyers for Lawyers Award 2013.