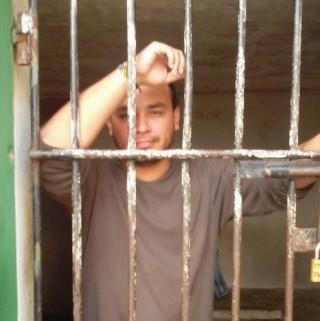 Rommel Durán and Leonardo Jaimes Marín are two Colombian lawyers that frequently receive threats because of their work as lawyers. One of the organizations that Rommel Durán and Leonardo Jaimes Marín work for is the ‘Pueblos’ lawyers team. This team supports members of the Pitalito community, that have been victims of forced displacement because of (para) military violence and are trying to return to their grounds. Their return has led to severe threats and harassments, probably instigated by the owner of the palm plantations that are currently on the grounds that traditionally belong to the Pitalito community.

An example of these harassments is the arbitrary detention of Rommel Durán and Leonardo Jaimes Marín in September 2013. Also, in December 2013, a group of people, amongst whom Rommel Duran, have been shot when they were visiting members of the Pitalito community.

In January 2014 Rommel Duran visited London, on invitation of the Caravana UK lawyers group as part of the celebration of the international Day of the Endangered Lawyer