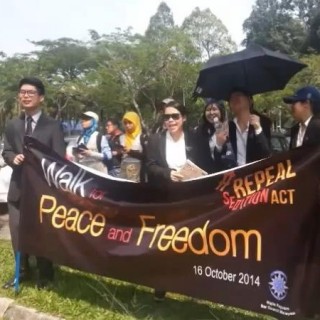 2000 lawyers called for repeal of the ‘sedition Act’

The Malaysian Bar Council on 16 October organized the ‘Walk for Peace and Freedom’ as a 1.3 kilometer march in protest against the recent string of arrests, charges, investigations and prosecutions under the archaic 1948 Sedition Act. The Sedition Act has frequently been misused with increasing frequency to obstruct legal professionals and lawyers who express their views about existing laws.

Lawyers for Lawyerscondemns such misuse of domestic law. Under principle 23 of the UN Basic Principles on the Role of Lawyers, members of the legal profession have the right to participate in public discussions concerning the law, the administration of justice and promotion and protection of human rights. The authorities have the duty to respect and protect this right. The Malaysian government is responsible for protecting the rights of those holding dissenting views, and that includes protecting peaceful protesters from police abuse and lawyers in performing their work.

In March 2013, Lawyers for Lawyers together with the Law Society of England and Wales filed a submission in the context of the Universal Periodic Review (UPR) of Malaysia before the UN Human Rights Council. In this submission, similar violations of Principle 23 are mentioned.

Lawyers for Lawyers agrees with the International Commission of Jurists’s reiteration of its call to the Government of Malaysia to follow through its 2012 commitment to abolish the Sedition Act.