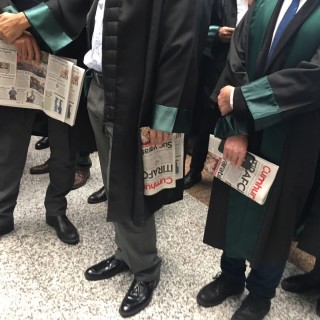 On Tuesday 22 November 2016, the criminal trial of  12 lawyers,  almost all of whom are members of the OHD, the Association of Lawyers for Liberty, continued. All these lawyers are accused  of involvement in terrorist activities. Lawyers from Lawyers for Lawyers (L4L) and Fair Trial Watch attended the trial in Istanbul. The President of the Amsterdam Bar Association, Pieter van Altena Regteren, attended the trial on behalf of 11 regional Dutch Bar associations. Furthermore there were international monitors from France and Italy present.

During their interrogation, the lawyers were questioned about their previous activities, such as the complaints they had filed with the European Court of Human Rights about violations of human rights by the Turkish army during the siege of towns in Eastern Turkey. These towns were predominantly inhabited by Kurds. They also had to answer questions about visits they had made to clients held in detention and interviews they had given to (Western) media.

The accused lawyers and their defense emphasized that the position of lawyers in Turkey is more difficult than ever. Last week, three organizations representing lawyers, the OHD, CHD and MHD (together with hundreds of other civilian organizations) were temporarily banned. On 22 November, the ban was made permanent. The accused  lawyers and their defense  are unable  to conduct a proper defense in this atmosphere of repression.

One of the defense lawyers said: “We are in one of the darkest periods of repression: the banning of organizations, the arrests of lawyers, the silencing of the media.”

Recent arrests of lawyers
There are more lawyers who have been arrested. On Monday 21 November 2016, four lawyers were arrested in Mardin (Southeast Turkey): Ziya Bagi, Seher Acar, Mahmut Bingol and Feyzi Adsız. They are all members of the Mesapotamic Lawyers Association, and were engaged in documenting human rights violations in the area where fighting was taking place in the conflict between the Turkish army and the PKK. At the beginning of November, three lawyers (and seven journalists) from the Turkish newspaper Cumhuriyet were arrested in Istanbul: Kemal Gungor, Bülent Utku and Akin Atalay. They are still being held in pre-trial detention.

On 14 November 2016, Levent Pişkin was arrested. He is HDP leader Selahattin Demirtaş’ lawyer, an LGBTI activist and a member of the OHD. He was arrested shortly after he visited Demirtaş, who was arrested at the beginning of November, in prison. Together with  the Law Society of England and Wales, L4L called for his release. On 16 November 2016, Piskin was provisionally released. The (only) question posed to him during his detention was why he wanted to talk to Demirtaş.

Deep concerns
L4L is deeply concerned about developments in Turkey and will continue to follow these closely, by, among other things, continuing to monitor hearings in cases involving lawyers. L4L will also continue to urge the Turkish government to respect lawyers and their role in the rule of law, in line with the Basic Principles on the Role of Lawyers. Click here for the press release.