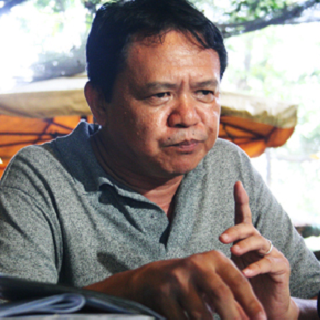 When L4L took part in the International Verification and Fact Finding Mission in the Philippines in 2008, two mission members wanted to visit lawyer Remigio ‘Ming’ Saladero, who was in prison. A storm made the visit impossible at the time, but fortunately, L4L finally spoke to him recently, two years later, in Amsterdam. Saladero is a lawyer of the union and works in almost 700 labor court cases. He is also president of the Pro Labor Legal Assistant Center (PLACE) and writes a column in a weekly journal.

The arrest of ‘Ming’ Saladero

Saladero was arrested in October 2008. A man in plainclothes came to his office, apparently for some legal advice. During their conversation, the man said he forgot some documents and left to get them. When he returned, he was accompanied by four men who did not show any identification. They took Saladero’s phone and dragged him to a car without license plates. Out on the street, another car without license plates was waiting; armed men sat in the car. No one knew that Saladero was taken away. In the car, he was interrogated. Subsequently, he was brought to the police’s head office.

When his wife came to his office in the afternoon, she immediately noticed that something was wrong. The door was open, Saladero’s phone was still on his desk, but the laptop was gone, and so was her husband. Since a false complaint regarding incendiarism had been made against Saladero somewhat earlier, she immediately called friends who were working for the media. That night, reports on the kidnapping were already on TV. According to Saladero, the swiftness of the action probably saved his life, because it forced the police to admit that he was in custody.

Two days after his arrest, Saladero heard that, together with five others, he was suspected of several killings and attempted killings (i.e. complicity in a rebel ambush on 5 March 2006 in Mindoro, the Mindoro case). Further, he was together with 26 others, suspected of incendiarism and destruction of commodities (a telecom pole) on 2 August 2008. In prison, he was in a cell with 70 other prisoners, where there were only 20 beds and 1 toilet for all of them. The Red Cross visited him in prison. The prisoners get a minor amount of food and have to buy extra food for half a dollar a day.

On 5 February 2009, Saladero was released from prison. Both charges against him were rejected, respectively on ‘technical grounds’ and because the different cases were taken together, while they should have been separated. In March 2009, a month after his release, the police indicted Saladero again in Mindoro, on request of the military. This new Mindoro case is still pending. On 11 February 2009, a week after his release, he was charged again, together with 64 community leaders. This time, Saladero was charged with murdering Ricardo Garmino on 29 July 2008. This charge was also rejected, on 13 November 2009 because of lack of evidence.

Saladero told us that the facts he was being charged with actually happened. However, none of the suspects was at the crime scene at the time the killings took place. Someone who is dependent on the military and even lives inside the military compound, has testified that Saladero and 5 others were guilty of the killings. Arrests on the basis of false complaints weren’t new on the Philippines, but this was the first time that a lawyer was targeted in this way. To our question why Saladero thought he was being prosecuted, he stated that it might have been related to his work as a lawyer of the labor union, or because the authorities suspected him of being member to the New People’s Army (NPA).