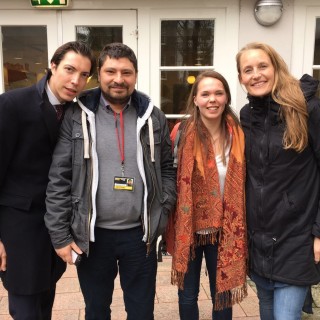 In March 2016, Lawyers for Lawyers had an interesting conversation with Russian lawyer Oleg Khabibrakhmanov. Oleg is a member of the Joint Mobile Group, and was in the Netherlands for the Movies that Matter festival.

Joint Mobile Group (JMG) was established in November 2009 by a group of Russian human rights organisations, with a leading role played by Committee for Prevention of Torture (CPT). It was created following the murder of human rights defender Ms Natalya Estemirova, in order to provide victims of human rights abuses in Chechnya with legal aid. JMG was the 2013 recipient of the Martin Ennals Award.

JMG has been the subject of attacks and harassment several times. In December 2014, the JMG offices in Grozny (Chechnya) were set ablaze. On June 3, 2015, the JMG Grozny offices were again violently attacked and destroyed by an organized mob. The JMG stated they repeatedly contacted the police, but assistance was refused. Bystanders proclaimed there were police in the crowd, who did not intervene. On March 9, 2016, masked assailants in three cars blocked a small bus carrying two members of the JMG as well as six foreign and Russian journalists near the border of Chechnya, violently beat them with bats, robbed them and set the vehicle on fire.