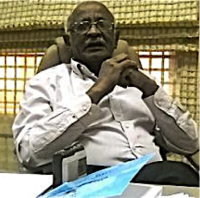 Lawyers for Lawyers expresses its grave concerns about the continued detention and prosecution of Mr Amin Makki Madani and Mr Farug Abu Eisa. Mr Makki Madani is a prominent human rights lawyer, President of the Confederation of Sudanese Civil Society and Vice President of the Civil Society Initiative. Mr Farug Abu Eisa is a former lawyer and chairman of the Sudanese opposition umbrella group, the National Consensus Forces (NCF).

In December 2014, they attended peace negotiations in Addis Ababa, Ethiopia. These negotiations culminated in the signing of an agreement on behalf of the participating civil society organisations, the so-called ‘Sudan Call’, aimed at bringing democracy to Sudan and to bring an end to the war.

Shortly upon their return to Khartoum, Mr Makki Madani and Mr Abu Eisa were arrested. It is reported that National Intelligence and Security Services (NISS) officials arrested them, without a warrant or explanation. Since then, various charges were filed against them, including “founding and running a terrorist organisation”, “undermining the constitutional system” and “waging war against the state”, which are capital offences.

On 23 February during a hearing they were denied bail, with the prosecutor reportedly claiming that the Sudan Call “called for the fall of the regime by any means, including military action and popular uprisings, and this constitutes a terrorist act.” According to a Sudan news agency, the case against the two lawyers is tried before the Special Terrorism Tribunal; the plaintiff and the first prosecution witnesses have been heard and the case will resume on Monday 23 March.

All information so far indicates that the trial against Mr Makki Madani is part of a government campaign against the Sudan Call and its signatories. In December of last year L4L sent a letter to the Sudanese government, urging them to unconditionally release the two lawyers and ensure their personal and professional safety. Furthermore, on 10 February 2015, the Law Society of Upper Canada sent a letter to the Sudanese President, expressing their deep concern over reports of the arrest and on-going detention of Mr Amin Makki Madani.

Lawyers for Lawyers will continue to monitor the trial against Mr Makki Madani and Mr Abu Eisa.

On 9 April, Amin Mekki Medani and Faruq Abu Eisa were released after the Minister of Justice decided to freeze the case against them pursuant to his powers under Article 58 of the 1991 Criminal Procedure Law. Madani is a