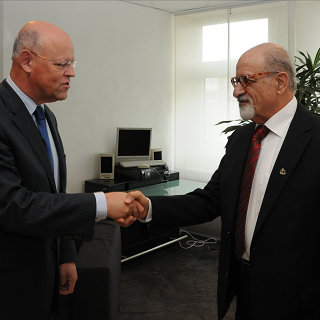 Haitham al-Maleh, the Syrian lawyer who was released from prison on 8 March 2011, visited Dutch Minister of Foreign Affairs Rosenthal on 11 August 2011. According to a press release of the Ministry, “[Rosenthal] expressed his sympathy with the Syrian people to Al-Maleh. ‘The violence used by the Syrain regime against the demonstrators is unacceptable and must stop’, Rosenthal said. ‘Because of the continuing violence, Assad makes it increasingly difficult for himself to play a role in the new Syria.’”

Minister Rosenthal wants an expansion of the European Union sanctions against Syria in order to increase the pressure on the regime. In his view, the number of persons on the EU-sanction list must be expanded, as well as the sanctions against public banking and telecom companies.

Before Al-Maleh was received by Minister Rosenthal in The Hague, he visited Rosenthal’s predecessor Ben Bot and also the ‘Geuzenverzet 1940-1945’ Foundation. This foundation awarded him the ‘Geuzenpenning’-award in 2006. According to Al-Maleh, this award made clear to the authorities that the world is watching if something happens to him.