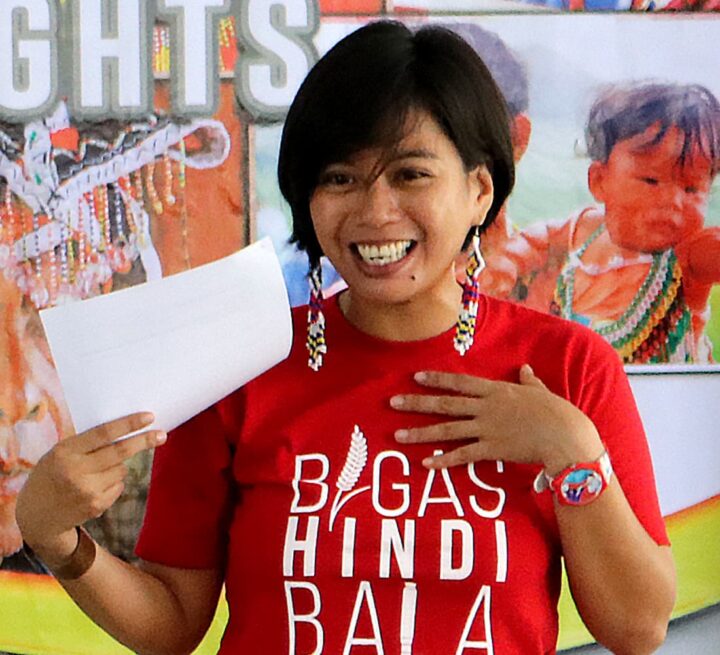 Philippine lawyer Musni provides legal assistance, with support of the EU, to poor farmers in the north. The state suspects her of financing terrorism.

The Philippine human rights lawyer Czarina Musni made clear prior to the video interview that she cannot tell the whole story. She and her 15 co-defendants are accused of financing terrorists. Criminal cases are now pending against two of them, and there are ongoing fears that new charges may be added. ‘In the past six years, during which Rodrigo Duterte was president, we often saw this pattern: the police raid someone who is critical of the government or advocates for human rights, it goes violently, there are even deaths. And while the residents have to wait outside, the police “find” incriminating material inside, usually weapons and explosives. These would then have been under a sheet in the baby’s cradle, or among the firewood. Totally implausible, who wouldn’t hide weapons better? But it leads to an arrest, and then more and more charges are added.’

Musni has not seen this pattern repeated since Ferdinand Marcos junior became president in May 2022. ‘We are hopeful but wary.’ However, the change of power has not changed the criminal case in which Musni and her co-defendants are accused of funnelling money to the New People’s Army, the military arm of the Communist Party CPP.

Musni explains: ‘I was involved with the Rural Missionaries of the Philippines-Northern Mindanao Region (RMP-NMR), which dedicates itself to the poor people in this remote region. The people there are often illiterate and ignorant of their rights. Small farmers are chased off their land when large companies, with the approval of the government, want to mine raw materials or set up large plantations. The RMP-NMR cooperated with the Union of Peoples’ Lawyers in Mindanao, of which I was a member. We informed people about their rights and started court cases on land issues. From 2014 to 2017, the RMP-NMR received a grant from the European Union. That money allegedly ended up with the New People’s Army, according to the prosecution. ‘The EU, which had already conducted an audit on the project, conducted another investigation and concluded that the allegation was false, Musni said. ‘Nevertheless, the case is continuing. So, they are basically saying that the EU is funding terrorism.

According to Musni, the two witness statements on which the prosecution is based are not credible and were declared under pressure. Meanwhile, two co-defendants are already in pre-trial detention on the basis of other (according to Musni, false) charges, and the suspects who are still in the Philippines, including several nuns, are at risk of arrest.

Musni: “Besides being very threatening to their lives and families, arrest would also create a huge stigma: “Ah, they are in jail, they are bad!” Most people here do not have access to credible information and are easily manipulated. This is also why President Marcos came to power. The Marcos family presents itself as representing the golden years in the Philippines, while hundreds have died, and hundreds have disappeared. For that, they have never taken responsibility.’ One of the two co-defendants detained has now had an initial hearing. Evidence will be presented in October. Musni does not expect a verdict within a year. ‘If the currently ongoing cases are unsuccessful, I am technically off the hook too. But then I can still be arrested, unless the court’s decision also addresses the other cases. Until there is clarity, I have to keep a low profile.’