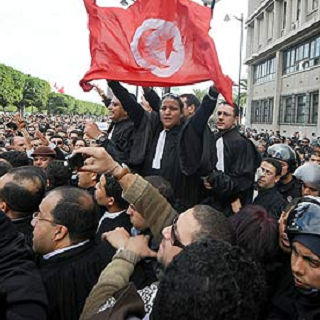 The disturbances that have occurred in Tunisia since mid-December 2010 have left many people killed, injured or in detention. Through a though repression, the authorities tried to suppress the many protests in the country. After former president Ben Ali left the country in the afternoon of Friday 14 January, power was eventually assumed by the Speaker of Parliament, until elections are held in March 2011.

Among those arrested were also lawyers, like Abderrayouf Ayyadi, Choukri Belaïd en Mohamed Mzem. After the former President had left Tunisia, they were released. Lawyers have been at the forefront in the struggle for human rights over the last years. Some of them, such as Radhia Nasraoui, Mohamed Abbou and Néjib Hosni, have been harassed, arrested or convicted to prison sentences by the former regime. Many lawyers participated in the peaceful protests in December 2010. After the police reacted violently on the protests, the greater part of all Tunisian lawyers went on strike on 6 January 2011.

L4L has expressed its concerns regarding the situation to the Tunisian embassy in the Netherlands and the Dutch embassy in Tunisia and called upon them to continue to monitor the situation for lawyers closely.