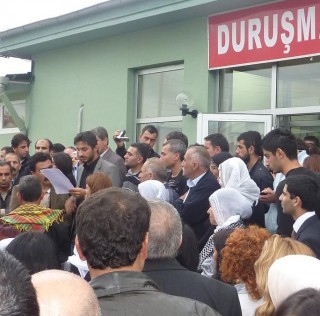 On 6,7 and 8 November 2012, the trial against 46 lawyers who are suspected of having ties with the Union of Communities in Kurdistan (KCK) continued in Silivri, Turkey.

On November 22, 2011, a broad campaign of arrests was launched in 16 cities targeting 46 lawyers, in the context of the case against the Koma Civakên Kurdistan (KCK, Union of Communities in Kurdistan).

The Turkish authorities regard the KCK as the local branch of the banned Kurdish labour party PKK. The majority of the suspected lawyers is (or was) involved in the defence of Abdullah Öcalan. According to the office of the prosecutor, the suspects have communicated instructions from Öcalan to his supporters. The lawyers are accused of “working for, or belonging to, a terrorist organisation.” It seems that those accusations are merely based on legitimate professional activities of the lawyers involved.

L4L was, together with many other international organizations and many Bar Associations, present to observe the hearings in the trial. After the hearing, the organizations drafted a press statement on their initial observations.

The trial against the 46 lawyers was once more postponed. The next hearing is scheduled on 3 January 2013. L4L is monitoring the situation closely and is deliberating on the actions to be taken to uphold the international pressure on Turkey.