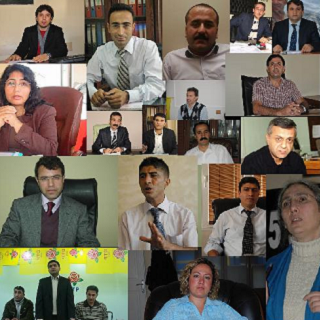 On 17 September 2013, the trial against 46 lawyers who are suspected of having ties with the Union of Communities in Kurdistan (KCK) continued in Silivri, Turkey. Lawyers for Lawyers has been monitoring this case since the start of it, and attended all eight hearings in this trial. The hearing that took place on 17 September was attended by Irma van den Berg.

During this hearing, a number of suspects made a statement in which the allegations were denied, and the defense council asked (again) for suspension or withdrawal of the detention of 15 of the accused lawyers, who have been detained for almost two years now (since 22 November 2011). The court rejected all the claims, as for as known without further justification. Also the request of the defense to hear Abdullah Öcalan as a witness was rejected. The next hearing in this case will take place on December 19, 2013.

The “Lawyers Trial” is not the only trial in which lawyers are prosecuted in the context of the war on terrorism. L4L also monitors the trial of the Dean of the Bar Association of Istanbul, Ümit Kocasakal, and the trial of the 15 lawyers who were arrested on 18 January 2013, again on suspicion of links with a terrorist organization (CHD).

L4L is concerned about the many trials against lawyers in Turkey, the long duration of these trials, and the length of the pre-trial detention in the “Lawyers Trial” and CHD case. L4L will therefore continue to monitor these cases and try to ask attention in as many ways as possible for the position of lawyers in Turkey that defend so called “enemies of the state”.

More information on the “Lawyers Trial”:
On 22 November 2011, 46 lawyers were arrested on accusations of “working for, or belonging to, a terrorist organization.” The Turkish authorities regard the KCK as the local branch of the banned Kurdish labour party PKK. The majority of the suspected lawyers was involved in the defence of Abdullah Öcalan. According to the office of the prosecutor, the suspects have communicated instructions from Öcalan to his supporters. The defence council of the lawyers states that there is no evidence of such a crime.