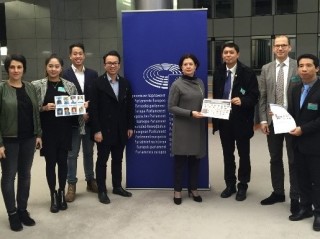 Meetings with Members of European Parliament

On 22 and 23 November 2017, representatives of Reporters Sans Frontières (RSF), Lawyers for Lawyers (L4L) and Viet Tan met with seven Members of the European Parliament. They visited the European Parliament on behalf of a broad coalition of NGO’s that is currently campaigning against the crackdown Vietnam carries out against peaceful expression. They were joined by Dang Xuan Dieu, a Vietnamese journalist/blogger who was exiled to France in February 2017 after an imprisonment of 6 years in Vietnam.

The NGO’s called attention to the worsening human rights record of the government of Vietnam. According to verified reports, the Vietnamese authorities have arrested or exiled at least 25 peaceful activists and bloggers.

One of Vietnam’s most renowned human rights lawyers, Nguyen Van Dai, was arrested on 16 December 2015 while he was on his way to a meeting with the delegation of the EU. As a lawyer, blogger and human rights defender, Nguyen Van Dai advocates for legal reform, multi-party democracy, and respect for the fundamental rights and freedoms recognized by the UN Universal Declaration of Human Rights. In a Resolution of 9 June 2016, the European Parliament condemned the conviction and harsh sentencing of journalists, bloggers and lawyers, and called for the immediate release of Nguyen Van Dai. On 25 April 2017, the UN Working Group on Arbitrary Detention has rendered a decision that his detention is arbitrary and called for his immediate release. Vietnam has not responded to these strong international requests.  Nguyen Van Dai is still in prison, for almost two years now, without any trial.

The Members of the European Parliament of various political groups were very interested in the up to date information about human rights violations in Vietnam. They were provided with an infographic detailing 25 peaceful journalists, bloggers and lawyers who were arrested recently.  The Members of the European Parliament expressed their concerns about the violations of human rights in Vietnam and the recent crackdown against peaceful expression.