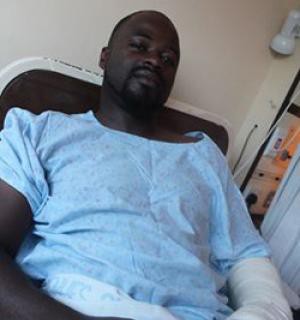 On 9 November 2014, Zimbabwean human rights lawyer Kennedy Masiye was honoured as Human Right Lawyer of the Year by the Law Society of Zimbabwe for his outstanding contribution to the protection and promotion of human rights in the country. Unfortunately he was unable to attend the presentation of the award at the Law Society’s Summer School in Nyanga as he was recovering in hospital following an assault by police officers on 6 November 2014. His colleague, lawyer David Hofisi, accepted the award on his behalf.

On 6 November 2014, participants of the Unity Square demonstration were beaten by the police. When Masiye tried to intervene in the assault on the participants, the police officers started beating him too, despite the fact that he clearly identified himself as a legal practitioner executing his professional responsibilities to provide legal assistance. The police threw away his practising certificate, reportedly stating: “We do not care about such things”. Masiye left the square severely injured with a broken arm. Lawyers for Lawyers called upon the Zimbabwe authorities to make sure that a prompt, thorough, impartial and transparent investigation into the attack on Kennedy Masiye will be carried out, so as to identify all those responsible, bring them before a competent and impartial tribunal and apply to them the sanctions provided by the law.

Illustration: Joost Hölscher ‘Zimbabwe has historically been lucky in the way certain environmental areas have been protected. Now, we see the threats against the environment rising and the work of environmental defenders and lawyers becoming riskier’. According to Fiona Iliff,