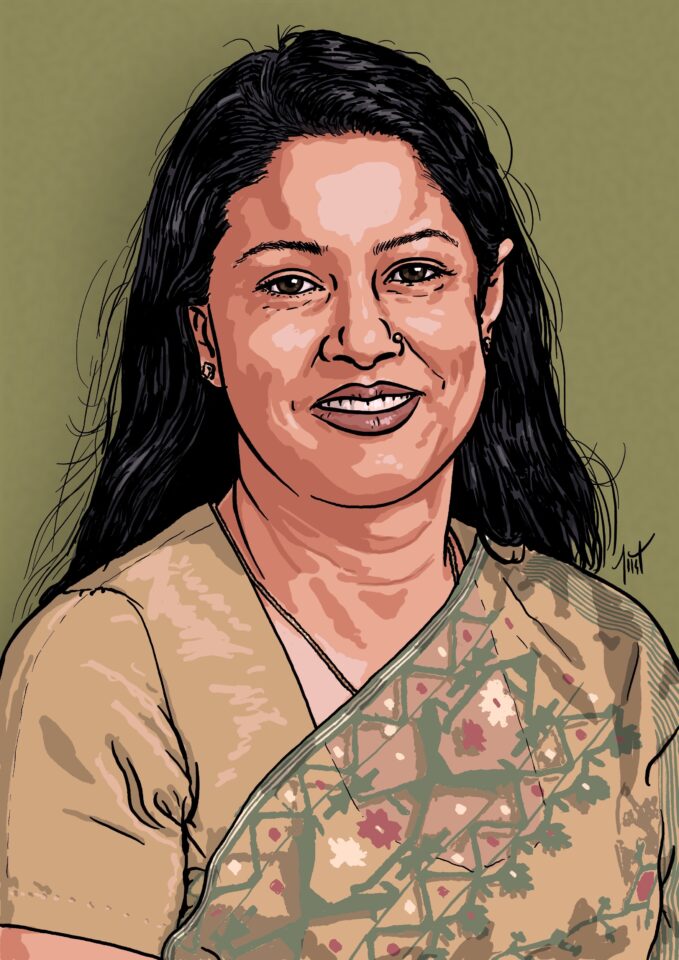 Syeda Rizwana Hasan is a renowned environmental lawyer from Bangladesh and the chief executive of the Bangladesh Environmental Lawyers Association (BELA). As the only environmental justice organisation in Bangladesh, BELA is involved in advocacy and environmental public interest litigation, through which they provide legal assistance to communities affected by environmental issues. Ms Hasan considers her work rewarding, but is also keenly aware of the challenges that come with the cases she takes.

Why she started working as an environmental lawyer? ‘I did not realize the consequences’, jokes Syeda Rizwana Hasan. But once she had started, she stayed for the communities who are supported by her work. By bringing grassroot voices to court, BELA tries to hold the causers of environmental harms accountable, but Ms Hasan is quick to emphasize that BELA is not after specific individuals or political parties: ‘BELA is not against the individual, we are against the system’. Her organisation has worked on many different types of cases, including different kinds of pollution, shipbreaking, grabbing of wetlands unregulated mining, commercial shrimp cultivation, deforestation and loss of biodiversity.

BELA has definitely seen some successes in the fight for environmental protection, for instance in the shipbreaking industry. Bangladesh has many shipbreaking yards, where ships from around the world are being sent to be dismantled. Shipbreaking is a major cause of pollution and public health concerns for shipbreaking workers and surrounding communities. Many of these ships contain hazardous materials, such as leftover oil, asbestos and heavy metals, which get released into the marine environment. In 2009, BELA won a court case concerning the shipbreaking industry in Bangladesh: the court stated that ships should be cleared of their hazardous materials before being imported to Bangladesh for demolition. In 2016, BELA obtained an interim order as the government and the shipbreaking unions had not implemented the 2009 judgment, stating that non-compliant shipyards should be closed. Even though getting the 2009 and 2016 judgments implemented has been an uphill battle, BELA’s efforts have been impactful nonetheless. In 2010, the Bangladesh government passed extra regulations for shipbreaking yards. Even the EU has passed new shipbreaking regulations and has refused to add the Bangladesh shipyards to its approved shipbreaking yards lists, thereby not allowing European ships to be dismantled in Bangladesh until the yards meet environmental and worker safety standards.

Despite even some recent successes, Ms Hasan sees her work getting increasingly difficult: ‘BELA mostly files its cases with the Supreme Court of Bangladesh, but judicial appointments have become politicized and corruption more prevalent’. Also, a number of regulations are hampering the work of organisations working on environmental justice and human rights. For example, the Digital Security Act of 2018 is widely believed to be used to crack down on critical voices in Bangladesh society. The Act criminalizes many forms of freedom of expression online. Overall, Ms Hasan operates in a very hostile environment. In 2014, her husband was picked up by an unidentified party, likely in relation to cases she was working on at the time focusing on housing projects. Her husband was released after two days, but Ms Hasan knows the situation could have ended very differently. Ever since, she is worried for the safety of her family. To aggravate matters, organisations impacted by BELA’s cases have created smear videos and news reports on Ms Hasan, implying she is politically motivated.

Besides the threats to her family and reputation, access to information is also an issue that Ms Hasan and her colleagues at BELA are struggling with. ‘Officially, there is a ‘Right to Information Act’, but in practice the government tries to hide reports and other information by claiming that it constitutes ‘intellectual property’ and can therefore not be made publicly available.’ This is causing delays in preparing for cases as even getting access to information can require a legal procedure.

Despite the threats, Ms Hasan continues to do her work, because ‘environmental justice is intrinsic to every other human rights issue. It is intrinsic to gender justice. It is essential for meeting a community’s basic needs’. Ms Hasan calls it a ‘sensitive time for Bangladesh’: with the courts no longer being independent and the crackdown on dissenting voices, BELA’s work is becoming increasingly challenging. ‘Restoring democracy and people’s right to choose leaders in not enough, the model of economy has to be revamped and spaces for the dissenting civil society and the activists have to be reclaimed’, she concludes. In the meantime, Ms Hasan will continue to fight for environmental justice for the communities she represents.