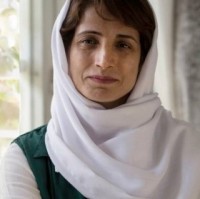 On 30 December 2018, lawyer Nasrin Sotoudeh was sentenced to 38 years in prison and 148 lashes after being tried in absentia and without access to a legal representative of her own choosing. In a joint letter Lawyers for Lawyers and the Law Society of England & Wales expressed their concern about the conviction of Ms Sotoudeh and called for her immediate release.

Nasrin Sotoudeh is a prominent human rights lawyer who in recent months has acted as the lawyer for women’s rights activists who protested against the compulsory veiling in Iran and were subsequently prosecuted. On 13 June 2018, she was arrested at her home in Tehran and taken to Evin prison, where she is still being held. It was reported that during a visit to Evin prison on 17 June 2018, Ms. Sotoudeh informed her husband that her charges seem to relate to “colluding” with Shaparak Shajarizadeh. Ms. Shajarizadeh is one of the women Ms. Sotoudeh was representing in a case brought against a number of individuals who had protested against compulsory veiling, while they were in the prosecutor’s office in Kashan, Isfahan province.

Prior to her detention 2010, Nasrin Sotoudeh represented many of the human rights activists who were arrested after the presidential elections in June 2009. She also defended Shirin Ebadi, the human rights lawyer and Nobel laureate who co-founded the Defenders for Human Rights Center. She also acted as lawyer of the Iranian-Dutch Zahra Bahrami, who was executed in Iran on 29 January 2011.