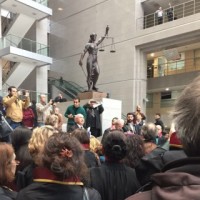 Together with the International Bar Association’s Human Rights Institute, the International Federation for Human Rights, Netherlands Helsinki Committee and World Organisation Against Torture, Lawyers for Lawyers called on the Turkish authorities to stop judicial harassment of civil society (including lawyers) in Southeast Turkey. The statement reads as follows:

The undersigned organisations are deeply concerned about the recent attacks and politically-motivated police custody measures against prominent civil society actors and political opponents in southeast Turkey. Our organisations call on the authorities in Turkey to immediately and unconditionally release human rights defenders and other civil society representatives and drop all charges against them, as they are being targeted for their human rights work.

They were taken into custody in connection with their alleged involvement with the Democratic Society Organisation (Demokratik Toplum Kongresi – DTK), a coalition of civil society actors and politicians calling for the democratisation of Turkey and the peaceful resolution of the Kurdish issue. On 23 November, while 70 people were released on probation, the court confirmed the detention of five people, including the former member of Turkish Medical Association’s Executive Board (Türk Tabipler Birliği) and former Board Member of the Human Rights Association (İnsan Hakları Derneği – İHD) Diyarbakır Branch, Şeyhmus Gökalp, on the allegations of “membership in a terrorist organisation.”

The police custodies do not appear to be compliant with the procedural guarantees provided for under Turkish law on criminal procedure. These guarantees prescribe summoning suspects to a police station (under Article 145 of the Turkish Criminal Procedure Code) as a first step, rather than immediately taking them into custody.  This not only violates domestic and international fair trial standards; it also appears at odds with the commitments voiced by President Erdoğan earlier this month regarding democratic reform. Moreover, the necessity and proportionality of the measures remain dubious, especially when assessed in the current pandemic context in which detention should only be used as a measure of last resort, when no other alternatives are possible. Indeed, these arrests and related investigations appear to be a tactic used to harass and intimidate human rights defenders and civil society in Turkey.

The undersigned organisations call on the authorities to:

On 20 November 2020, arrest warrants were issued against 101 individuals and at least 75 people were taken into police custody within the scope of an investigation launched by the Prosecutor’s Office in Diyarbakır. The only evidence brought against them was the fact their names were mentioned in DTK documents. The 24 lawyers, among those who were taken into custody, are also reported to be accused of having worked as observers during local and general elections.