Attacks against lawyers in the Philippines continue to take place and killings have reached a record high since the start of President Duterte’s administration in 2016. In response to the escalating killings, Lawyers for Lawyers has researched the killings of Philippine lawyers under Duterte’s regime from 2016 up and until 2021.

We were informed by our contacts from the Philippines that a total of 66 lawyers were killed. More than 38 of them were practicing lawyers, who seemed to be killed simply for doing their job. This was partly due to red-tagging. A visual representation of our research, including the names of the lawyers that were killed, can be found below.

We express our deep concern over the attacks and the oppressive working environment lawyers still face in the Philippines. We call on the Duterte Government to adequately protect the safety and independence of lawyers and end the culture of impunity in which these attacks occur. 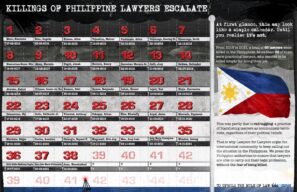