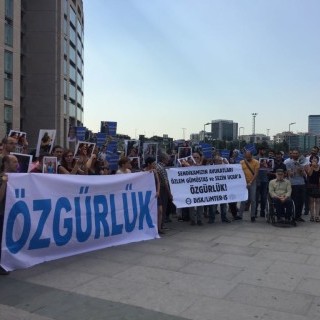 L4L and FTW in Istanbul for hearing Ezilenlerin Hukuk Bürosu

On 16 and 17 July 2018, 23 people accused of being a member of a terrorist organization and of terrorist propaganda stood trial in Istanbul. Four of them are lawyers of the Ezilenlerin Hukuk Bürosu (“Law firm of the Oppressed”): Sezin Uçar, Őzlem Gümüştaş and Gülhan Kaya. Sezin Uçar and Őzlem Gümüştaş  have been in pre-trail detention since 19 October 2017. This was the first hearing in this case. Representatives of Lawyers for Lawyers (L4L) and Fair Trial Watch (FTW) observed the case, together with an observer from Switzerland.

The accusations
The accusations are largely based on the fact that the lawyers have attended several funerals and commemorations of clients of them, some of whom have been killed whilst fighting IS in Syria. According to the indictment, there is a link between the funerals and commemorations and a terrorist organisation. Other accusations include attending protests, presenting press statements in front of the court house and posting messages on social media, that are supposedly terrorist propaganda.

The defense
The accused lawyers and their defense counsel stated that the Turkish government has been targeting lawyers since 2011, because they do not like their work methods and lawyers are seen as opponents. This case is another example of that. In this case, the lawyers were involved in the process of bringing back the bodies of their clients from Syria to Turkey, attending their autopsies and gathering the facts of their deaths. The accused lawyers also attended funerals, that were meant to commemorate the deceased. Of all the thousands of people that attended the funerals, they were singled out without explanation. Furthermore, they stressed that there is no evidence for any criminal activity or involvement in terrorist activities in the file. They have been attending protests and presenting press statements about human rights violations as is explicitly allowed in article 23 of the Basic Principles on the Role of Lawyers.

During the hearing the accused lawyers and their defense lawyers identified many defects in the indictment. The indictment does not mention the dates of many of the alleged crimes, nor the date of the start of the investigation. The prosecutor did not obtain permission of the Ministry of Justice to start the investigation, although this is required when lawyers are concerned. Court orders for several searches were obtained retroactively; the searches were executed without representation form the bar. Witness statements are anonymous and not precise, and the witnesses are not heard in court, as is required by (international) law. The lawyers claimed that the right to a fair trial is disregarded completely.

Conclusion
This case is one of many, many cases against lawyers who are accused of terrorism related activities and whose human rights are violated. Not only the fact that so many lawyers are prosecuted and convicted is extremely worrying, but also the way the cases of the lawyers are handled by the police, the prosecutor and by the court. Lawyers, as anyone, have the right to a fair trial and the right of freedom of assembly and freedom of speech. But lawyers should also not be prosecuted for exercising their professional duties, they should not be identified with their clients and their right of freedom of assembly and freedom of speech in their capacity as a lawyer should not be violated.

Lawyers for Lawyers and Fair Trial Watch call upon the Turkish authorities to end repression and persecution of lawyers in Turkey, and to release all lawyers under arbitrary attention, including Sezin Uçar and Őzlem Gümüstas.

Update: On 5 October 2018, Sezin Uçar and Őzlem Gümüstas were released from pre-trial detention. The trial against them still continues.