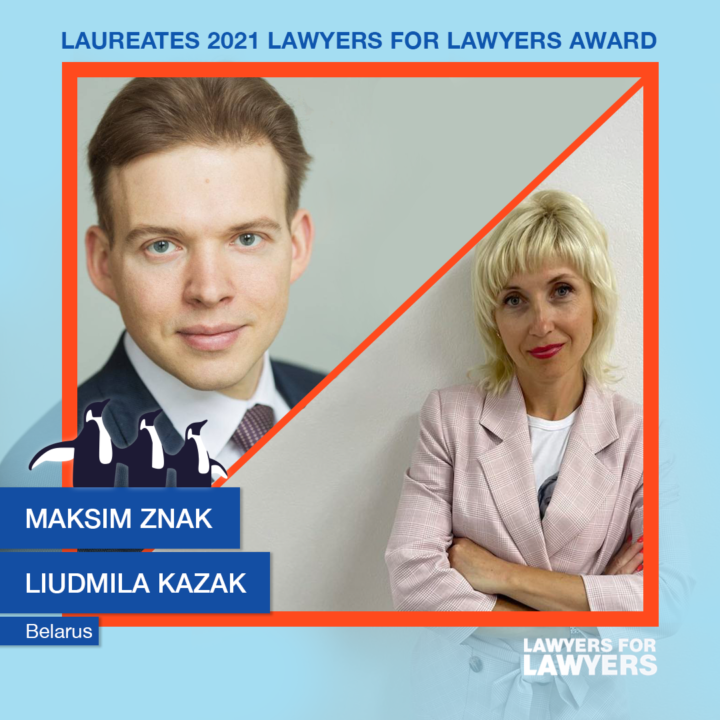 “By awarding Maksim Znak and Liudmila Kazak the Lawyers for Lawyers Award, the jury wants to highlight the important work of both lawyers who bravely represented Belarusian human rights defenders and opposition leaders and are paying a high price for their work. With this Award, the jury also wants to raise awareness of other Belarusian lawyers who have been subjected to pressure, harassment and intimidation in connection to their professional activities especially in the aftermath of the 2020 presidential elections”.

Maksim Znak represented Viktor Babaryko, a potential candidate in the presidential elections who was not allowed to formally register. He also provided legal assistance to Svetlana Tikhanovskaya, a former candidate for the presidency who is now in exile, and Maria Kolesnikova, Coordination Council co-leader. On 9 September 2020, Mr. Znak was arrested for allegedly having committed the offence of “calls to actions seeking to undermine national security” in violation of Article 361(3) of the Criminal Code of Belarus. In February 2021, additional charges were added, including “conspiracy to seize state power” and “organising extremism”. On 6 September 2021, Mr. Znak was sentenced to 10 years in prison during a closed-door-trial. His sentencing is another indication of the challenging working environment in which Belarusian lawyers must operate.

Liudmila Kazak is a human rights lawyer who has defended political prisoners, human rights defenders, and journalists, including the opposition leader Maria Kolesnikova. On 24 September 2020, she was detained. The next day, the court held Kazak administratively liable for disobeying police officers based on testimony given by anonymous masked witnesses who appeared via Skype and claimed to be the arresting officers. She was sentenced to a fine under article 23.4 of the Belarusian Administrative Code and released on 26 September 2020. On 11 February 2021, she was notified of a pending disciplinary proceeding against her before the Qualification Commission for legal practice in the Republic of Belarus. On 19 February 2021, the Qualification Commission disbarred Ms. Kazak. Ms. Kazak appealed the decision, but, on 15 April 2021, a district court upheld Ms. Kazak’s disbarment. On 17 June 2021, an appellate court upheld the district court decision.

Human rights lawyers from across the world were nominated for the Lawyers for Lawyers Award 2021. The independent expert jury (Ms Heikelien Verrijn Stuart, Mr Cees Flinterman, Mr Egbert Myjer, and Ms Channa Samkalden) selected Liudmila Kazak and Maksim Znak as laureates. The independent expert jury selected human rights lawyer U Khing Maung Zaw from Myanmar and the Collective for the Defence of Hirak Detainees from Algeria as shortlisted candidates.

The Lawyers for Lawyers Award aims to honour lawyers who have made significant contributions to the protection of the rule of law and human rights in challenging environments. Through the Award, Lawyers for Lawyers generates public recognition for their work. The prize is a special token as well as a donation of €10.000. Former laureates are: Alec Muchadehama from Zimbabwe (2011), Magamed Abubakarov from the Russian Federation (2013), Jorge Molano from Colombia (2015), Sirikan Charoensiri from Thailand (2017) and Selçuk Kozağaçlı from Turkey (2019).