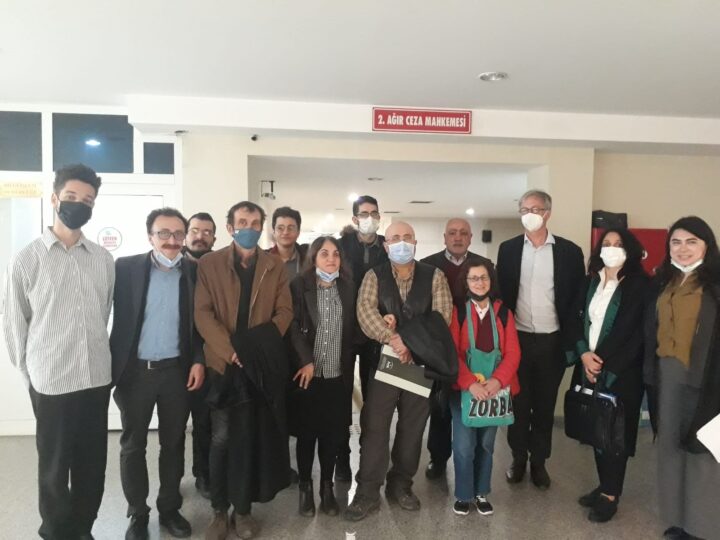 From 30 March to 2 April 2022, Lawyers for Lawyers visited Turkey for a trial monitoring mission. The aim of the mission was to attend the first hearing in the trial against lawyer Berrak Çağlar.

The basis of the accusations against Berrak Çağlar are interviews she conducted and speeches she made in solidarity with imprisoned lawyers in Turkey and specifically colleague lawyers Ebru Timtik and Aytaç Ünsal, who were imprisoned and on a death fast in 2020, to support their demand for a fair trial.

The first hearing in the case against Berrak Çağlar, took place on the 31st of March 2022 in the Kocaeli 2nd Heavy Penalty Court in Kocaeli (Kocaeli Adalet Sarayi). Berrak Çağlar stood trial together with her husband Ali Sinan Çağlar. The hearing was attended by two Lawyers for Lawyers representatives and a representative from the Avocats Européens Démocrates (AED). Moreover, several local lawyers attended the hearing in solidarity with the defendants.

During the hearing, one of the lawyers representing Berrak Çağlar pleaded that she was not guilty and stated that the prosecutor acted in violation of the Attorneyship Law of Turkey by not requesting permission from the Ministry of Justice to prosecute Berrak Çağlar. The chief judge immediately did not accept the demands.

The trial continued with Berrak Çağlar presenting her defence statement. During her speech, the chief judge stopped Berrak Çağlar on various occasions to ask questions about her relationship to the People’s Law Office (HBB) and her clients. The lawyers objected this by stating that information about her clients is confidential. The chief judge continued by discussing the various types of evidence that were brought forward against Berrak Çağlar. In relation to this, it is important to note that a police investigation into Berrak Çağlar was started in relation to the statements she gave in the press about lawyers Ebru Timtik and Aytaç Ünsal. The police followed Berrak Çağlar and her husband for six months, and tapped their phones. This was followed by a search of her home and office.

The lawyers stated that the phone tapping of Berrak Çağlar was unlawful. According to the lawyers, there was no evidence or strong suspicion of a crime being committed by Berrak Çağlar during the police investigation and thus no legal basis for the interception of correspondence through telecommunication. The lawyers requested to have the possibility to examine the tape recordings of the phone calls that were included in the indictment.

The chief judge questioned Berrak Çağlar about various interviews she conducted with Turkish broadcast media shows in which she spoke about the situation and latest developments in relation to lawyers Ebru Timtik and Aytaç Ünsal. She was also questioned about several European trips that she made to participate in international conferences during which she spoke about imprisoned lawyers in Turkey and the risks they are facing whilst discharging their professional functions.

With their final demand the lawyers sought to lift the travel ban that was imposed on Berrak Çağlar for medical reasons.

The chief judge ruled that the lawyers would be presented with the full recordings of the phone conversations that were included in the indictment as evidence and that the travel ban was lifted. The next hearing will take place on the 14th of June 2022.