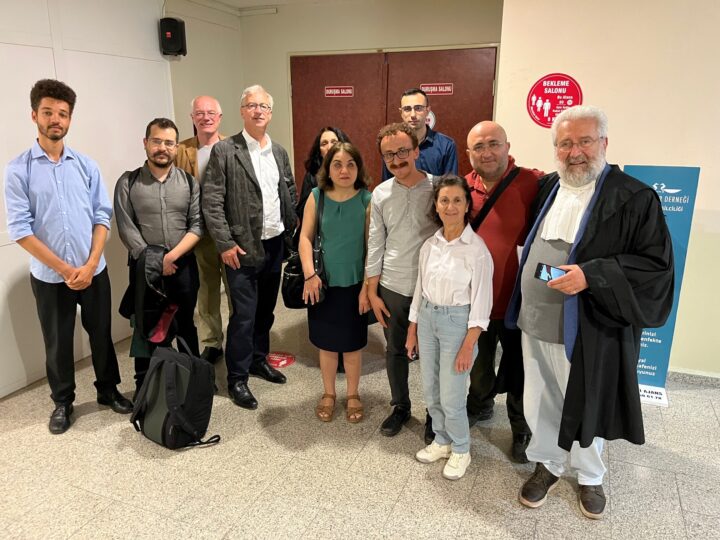 On 14 June 2022, representatives of Lawyers for Lawyers observed the second hearing in the trial of lawyer Berrak Çağlar who is accused of being a member of an armed terrorist organization, after expressing solidarity with her imprisoned colleague lawyers from Turkey and specifically Ebru Timtik and Aytaç Ünsal, who were on a death fast in 2020.

Lawyers for Lawyers, Avocats Européens Démocrates (AED) and several local lawyers monitored the first hearing in the trial on the 31st of March 2021. The first hearing focused on the evidence against Berrak Çağlar that was gathered after an investigation was started into her, the interviews and speeches Berrak Çağlar conducted in solidarity with imprisoned lawyers from Turkey and about the situation and latest developments in relation to lawyers Ebru Timtik and Aytaç Ünsal. The lawyers requested to examine the tape recordings of the phone calls that were included in the indictment. Furthermore, the travel ban that was imposed on Berrak Çağlar was lifted during the hearing.

The second hearing of 14 June

During the hearing Berrak Çağlar was represented by two lawyers. The first lawyer responded to the claim of the chief judge by mentioning International Fair Trial Day (IFTD), that was observed on 14 June, and the Ebru Timtik Award that was established as part of IFTD. The lawyer mentioned that information about IFTD will be added to the written defence. She underlined that the case of Ebru Timik is relevant to the case of Berrak Çağlar because her accusation stands in direct relation with the solidarity she expressed with Ebru Timtik.

The lawyer continued by stating that the Istanbul Public Prosecutor’s Office ruled in April 2021 that Berrak Çağlar was not a member of an armed terrorist organization and that there was no need for further investigation based on a complaint filed by a lawyer.[1] Since this record from the Istanbul Public Prosecutor’s Office was not yet part of the case file, the lawyer argued that the record should be added to the case file, which was accepted by the chief judge.

Since Berrak Çağlar did not get the opportunity to talk about the case of Ebru Timtik during the hearing, the second lawyer representing Berrak Çağlar stated that she should be given the possibility to explain herself so she could explain what she did in defence of Ebru Timtik. The judge rejected this request, stating that Berrak Çağlar was heard extensively during the first hearing and that there was thus no need for additional information during this sharing.

At the end of the hearing the judge underlined that all the additional records and documents will be added to case file and will be individually assessed. Moreover, the chief judge announced that the court received the tape recordings of the phone calls that were included in the indictment from the Prosecutor’s Office just before the second hearing, and that the lawyers will obtain a copy of the tape recordings upon request.