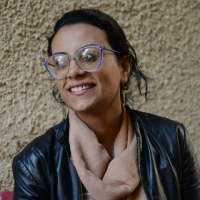 Lawyers for Lawyers has nominated Mahienour El-Massry for the 2021 Martin Ennals Award for Human Rights Defenders. The award honours individuals and organizations who have shown exceptional commitment defending and promoting human rights, despite the risks involved.

On 22 September 2019 El-Massry was arrested in front the State Security Prosecution office in Cairo, where she was following up on the investigations into a lawyer who was detained as part of a wider crackdown against human rights defenders and independent civil society organized by the Egyptian government. She remains in detention until now. Her detention is automatically renewed without a hearing due to the COVID-19 crisis.

This is not the first time Mahienour el-Massry was arrested as a result of adequately discharging her function as a lawyer. Since 2014, she has spent lengthy periods in Egyptian prison under difficult circumstances.

Lawyers for Lawyers is actively campaigning for Mahienour El-Massry as part of the #FreeTheLawyers campaign.