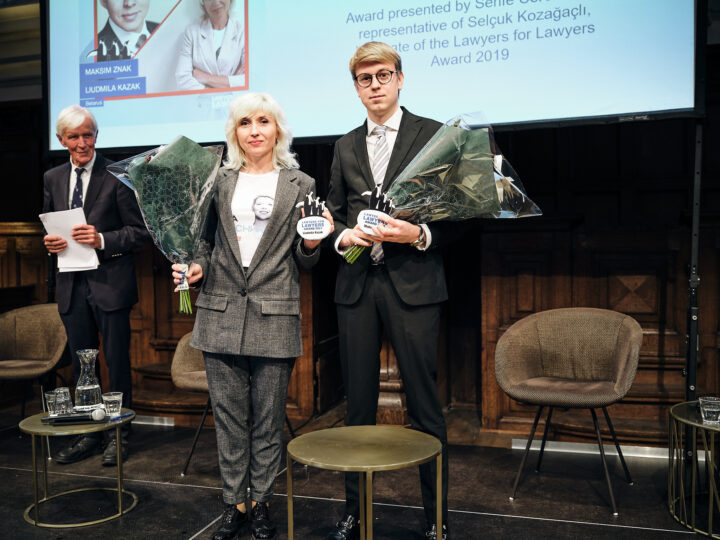 The event, moderated by Gerrit Jan Pulles, former vice-president of the Amsterdam Bar Association, started off with a welcome by Evert-Jan Henrichs, President of the Amsterdam Bar Association and Irma van den Berg, President of Lawyers for Lawyers. Opening remarks were presented by Baroness Helena Kennedy QC, Director of the International Bar Association’s Human Rights Institute (IBAHRI). Further, a keynote speech was delivered by Ybo Buruma, judge of the Dutch Supreme Court. The event further consisted of two panel discussions, concerning the increasing pressure of lawyers in different European contexts and in the Netherlands, and the Award ceremony, during which the Laywers for Lawyers Award was presented to Belarusian lawyers Maksim Znak and Liudmila Kazak.

The first panel discussion centred around the increasing pressure on lawyers in Belarus, Poland and the United Kingdom by discussing several topics ranging from the independence of the bar associations to the influences of the government and media.

The first speaker in this panel, Illia Salei, an advocate from Belarus who gave legal support to the democratic presidential candidates in 2020 and was consequently arrested and prosecuted, highlighted the pressure on the legal profession in Belarus and the importance of Belarus remaining high on the international agenda.

“The current situation is a complete elimination of the independence of the legal profession in Belarus and this happens today in 2021 in a European country just a couple of hundred miles from here.” – Illia Salei

Salei shared that in the past year, 37 lawyers were disbarred in Belarus, and 2 lawyers prosecuted for their work as a lawyer. The systematic pressure, focusses more on decreasing the independence of the bar association, the bar exam, and the profession as a whole.

The second speaker, Mikolaj Pietrzak, Dean of the Warsaw Bar Association, explained that in Poland mechanisms that allow lawyers to perform their professional duties are being undermined by for instance attempts to reduce the independence of the bar associations, underfinancing legal aid, and by limiting or undermining lawyer-client confidentiality.

“It is our duty as lawyers to educate civil society and make them understand that they need lawyers, but that lawyers also need the support of civil society, the media, and NGO’s in defending these mechanisms which allows lawyers to perform their duties and protect the rights and freedoms of citizens”. – Mikolaj Pietrzak

The last speaker in this panel, Sue Williams, solicitor from the United Kingdom and Law Society Human Rights Committee Chair, focussed on the influence of the media on the rule of law in the United Kingdom. She explained that immigration lawyers are increasingly framed by governmental authorities as ‘activist lawyers’ and ‘lefty lawyers’, which after being picked up by the media, led to an attack on an immigration law firm.

Increasing Pressure on Rule of Law in the Netherlands

The second panel consisted of Ybo Buruma, judge of the Dutch Supreme Court, Igna Oomen, Amsterdam-based asylum lawyer, and Peter ter Velde, safety coordinator of Dutch public broadcast organisation NOS and project leader of PersVeilig. From an interdisciplinary perspective they discussed how the Netherlands should deal with the ever-increasing pressure on Dutch lawyers and other professions that are important for the rule of law, amongst others, journalists. Also, the panel reflected on the question what the Netherlands could learn from the developments regarding the rule of law in Belarus, Poland and the United Kingdom, the countries discussed during the first panel.

The award ceremony was opened by remarks of Bahia Tazib-Lie, the Dutch Human Rights Ambassador. In her speech, she highlighted the vital role of lawyers and human rights defenders. After the presentation of the award, this year’s award winners were able to present speeches, reflecting on the circumstances of their own lives as lawyers and about their home country Belarus. Overall, their presentations resonated visibly with the attending lawyers and encouraged reflection on the situation in Belarus, and likewise on the countries of origin of the attendees.

Since Maksim Znak remains imprisoned, his speech was presented by Dmitry Laevsky, a fellow lawyer. It touched upon both individual fates such as his own, but also encompassed the broader context in which those personal tragedies are situated. He outlined the human rights situation as a constant development by referring to the heroes who have fought for justice in the past and whose victories changed everything for their descendants. Most strikingly the speech highlighted the proximity of Belarus as a European country to Western European countries – the frontline of human rights hasn’t shifted to distant countries and minorities but is instead right next to us. We must ask: How can it be that in the sphere of justice we time travel back to the darkest hours of our history? And most importantly, how can we return?“We may be dwarfs but we are standing on the shoulders of giants and gains from centuries of human rights history which cannot fall and disappear in one year. We have not won this war, and some are retreating but we will not surrender.” – Maksim Znak

Liudmila Kazak, the joint award winner was able to find poignant words to describe the consequences of the lack of justice that the Belarussian society is grappling with. She pointed out how the structural difficulties affect everyone in society, from lawyers to ordinary citizens, and that its crucial to understand why the pressure happens. The importance of an independent judiciary influences everyone, and therefore should be protected.

“When the safety of lawyers is at stake the government should protect them. But when the government interferes of the right to lawyers it influences not only the lawyers but also the people and interrupts the right of justice.”  – Liudmila Kazak

The recording of the seminar and award ceremony can be found here. 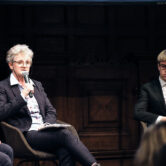 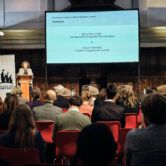 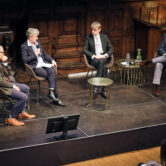 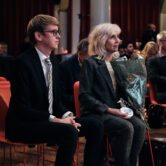 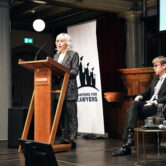 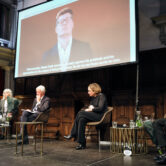 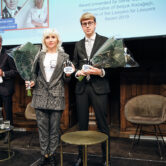 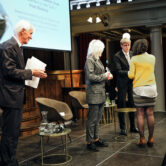 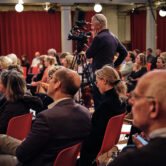 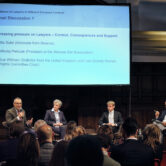 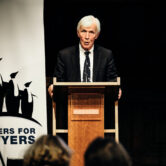 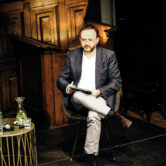 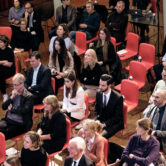