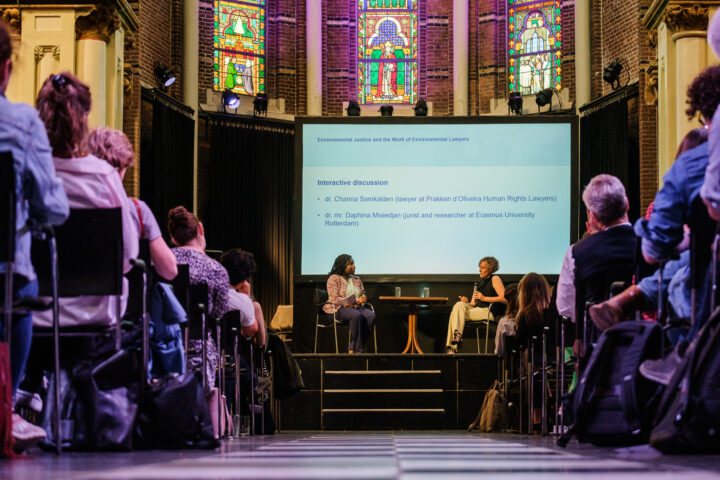 The seminar, moderated by mr. dr. Daphina Misiedjan, jurist and researcher at Erasmus University Rotterdam, started with a welcome speech from the president of the Amsterdam Bar Association, Evert-Jan Henrichs. In support of Ukrainian lawyers, a video message recorded by Valentyn Gvozdiy, Vice-President of the Ukrainian National Bar Association (UNBA), was broadcasted. In this video, Mr. Gvozdiy explained how the new martial law unlawfully restricts the constitutional rights of Ukrainians and the actions undertaken by the UNBA in an attempt to protect these rights.

Opening remarks were delivered by David R. Boyd, United Nations Special Rapporteur on human rights and the environment, who emphasized the vital role played by lawyers in addressing environmental and human rights crises.

Whether you are an academic lawyer, a practising attorney, a judge, a mediator, a lawmaker, or a law student: in all of these roles, we have an obligation to advance the cause of human rights and to advance the transformation toward a more just and sustainable community. (David R. Boyd)

The first speaker, dr. Channa Samkalden, a Dutch lawyer at Prakken D’Oliveira Human Rights Lawyers, reflected on the role of the law, environmental justice and corporate liability. She discussed the lawsuit initiated in 2008 by four Nigerian farmers and Friends of the Earth (which she represented) against the multinational Shell, which was ultimately found liable by a Dutch court for oil pollution in the Niger Delta. Samkalden highlighted the difficulties faced by foreign victims seeking compensation for the environmental damages caused by corporations, and the imbalance in funds and resources between parties. She also explained the importance of transparency and access to information in environmental cases.

[Transparency and access to information] ought to be a principle when we talk about international justice and environmental cases. (Channa Samkalden)

Following the break, the environmental lawyer Dickens Kamugisha, the chief executive officer of the Africa Institute for Energy Governance AFIEGO, spoke and how he is pursuing enviromental justice inside and outside of the courts. He started off by underlining the importance of mobilising local communities by lawyers to gain access to justice. He offered three important factors to consider in this context. The first is to educate people on their laws, particularly where many people can’t read or write and cannot afford a lawyer. A second mobilisation technique is to drive people to demand their rights, this is really important in Uganda, as 80% of people derive sustenance from nature. A third means of mobilisation relates to justice; in terms of access to justice there are different factors that determine what people who have been wronged need to go through to get redress. There are huge projects in Uganda (dams, oil projects etc.) that effect critical environmental places; so it’s important for lawyers to mobilise communities so they engage parliament and other oversight powers and the judiciary, according to Kamugisha.

Kamugisha shared that is almost impossible to get a hearing in an Ugandan court in most environmental cases because the courts perceive them as political, since politicians and the president have interests in i.e. the oil sector. Once lawyers take these cases to court, they are facing real challenges. Lawyers investigating projects that are considered politically attractive, face a lot of threats and harassment from government and security officials. Kamugisha himself was also arrested by the police for his work and held for several days. Kamugisha shared that the government often uses harassment and unlawful detention to prevent lawyers from doing their work.

He expressed that Dutch lawyers could support the work of Ugandan environmental lawyers by providing pro bono legal advice and legal assistance and acting as amicus curiae in Ugandan court cases.

The next speaker was Charles Hector, an environmental lawyer and human rights defender from Malaysia. He outlined numerous examples of government opposition in relation to (illegal) logging permits. In this context he stressed the importance of the Malaysian Bar Association, which has transformed itself into a very much proactive organisation; since then lawyers started to “walk the talk”. When any human rights violations happen or lawyers are harassed, the bar association stands behind them. In doing so they can support the cause of justice and try to go above and beyond. However, just as in Uganda, not many people are aware of their rights. When the government doesn’t have citizens’ best interests at heart, and instead chooses to prioritise business such as logging, this may result in their rights being disregarded. As such, it is particularly important to educate people on their rights.

Following these two speeches, there was a short panel discussion, during which both speakers underlined the biggest problem is that the general population aren’t really aware of their rights and the law. This is a serious problem in many countries; this is where lawyers in various countries can contribute by spreading awareness. Besides this, mr. Kamugisha underlined the practical impediments for public interest litigation in many countries.

Regarding public litigation particularly there are real challenges; first and foremost it is really difficult to access justice even for people who know there rights (i.e. travelling 50-100 km to reach the nearest court). It is very difficult and very challenging as people might not even want to go to court. (Dickens Kamugisha) 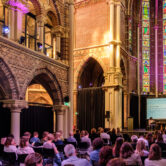 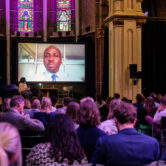 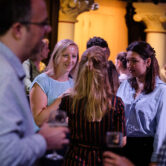 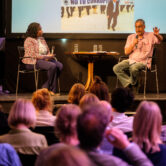 In Uganda, those who give citizens a voice are the enemy

Taking environmental matters to court, of course. But also standing up for the rights of lawyers and the judiciary, so that they can do their work undisturbed by national governments. According to Ugandan environmental lawyer Dickens Kamugisha, this is the