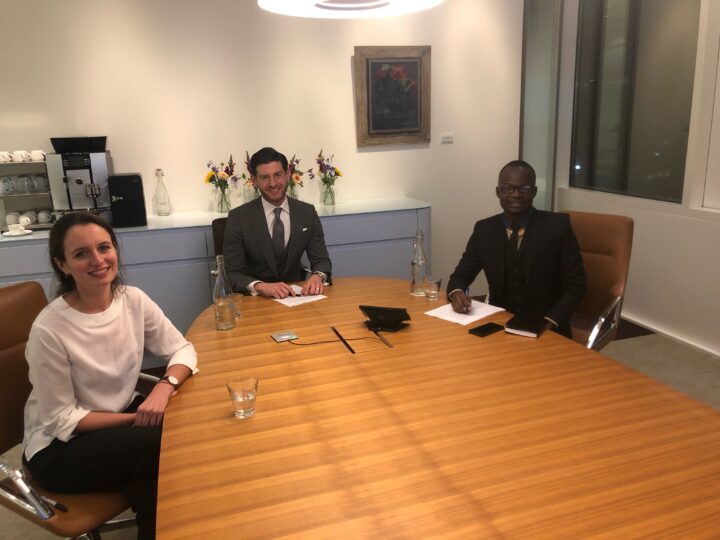 Last week Lawyers for Lawyers joined forces with its partner NautaDutilh in a webinar on LGBT+ rights in Uganda. Boudewijn Smit and Else Bavinck, both associate at NautaDutilh, had the honor to interview human rights lawyer and LGBT+ rights defender, Shibolo Awali Sean, on the position of the LGBT+ community in Uganda and his work as a human rights lawyer. ‘There is a wind of change blowing in the region, but sometimes it misses some places.’ However, Shibolo never loses hope.

Lawyers for Lawyers is proud to have NautaDutilh as its partner. Over the last few years, we have been organizinig various joint activities to draw attention to the work of lawyers worldwide who face reprisals, improper interferences or unreasonable restrictions in the execution of their profession.

One of these lawyers facing repression in his home country is Shibolo Awali Sean. Sean is a well-known human rights defender who represents clients from the LGBT+ community in Uganda. He is temporary relocated in the Netherlands, where he is taking part in the Shelter City program. This program gives him the opportunity to take a break from his work at home and create awareness for the appalling (legal) position of the LGBT+ community in Uganda.

While Uganda’s Constitutional Court declared the Anti-Homosexuality Act (also known as the Kill the Gays Bill), ‘null and void’ on procedural grounds in August 2014, the colonial-era law, which criminalizes ‘carnal knowledge against the order of nature’, is still part of the legal framework of Uganda. It is used to target members of the LGBT+ community. The provision of the Penal Code Act is often misapplied, arresting people on the pretext that it is illegal to be gay.

Sean notes that Uganda does not provide the LGBT+ community an environment in which they can identify themselves as LGBT+ persons. Uganda’s LGBT+ community continues to face police extortion, loss of employment, residential evictions and arbitrary arrests. Moreover, politicians often use the LGBT+ community as scapegoats for various social issues in Uganda. Although there are positive developments in surrounding countries, like Botswana and Angola, this wind of change has not reached Uganda yet.

Luckily, brave LGBT+ defenders such as Shibolo Awali Sean have courageously refused to stay silent and continue to fight for the human rights of the LGBT+ community.

Want to support Sean in his cause?

Sean believes in numbers: so spread the word and create awareness. You can support his NGO, TRIUMPH UGANDA, by making a donation. ‘One euro enables a lawyer to take public transport to his client.’

If you would like to do so donate via http://www.leetchi.com/c/safe-space-for-victims-of-homophobia or send an e-mail to triumphuganda@hotmail.com.

Shibolo Awali Sean is a human rights lawyer and LGBT+ rights defender from Uganda. He represents clients from the LGBT+ community and is the Executive Director of The Robust Initiative For Promoting Human Rights (TRIUMPH UGANDA), a NGO that promotes human rights, sexual and reproductive health rights (SRHR) and access to justice for marginalized members of the community. You can read more about him in his recent interview with Trouw.