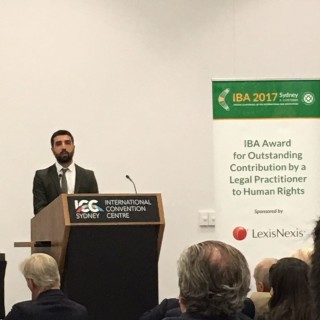 The IBA Human Rights Award is annually awarded to a legal practitioner who, through personal endeavour in the course of such practice, is deemed to have made an outstanding contribution to the promotion, protection and advancement of the human rights of all, or any group of, people, particularly with respect to their right to live in a fair and just society under the rule of law. The members of the IBA judging panel noted that in terms of Ramazan Demir’s efforts in the protection and advancement of Human Rights, he has made “significant personal endeavours” and in terms of the international impact and sustainability, Ramazan Demir has made “a high impact on defence work in extremely challenging and threatening circumstances”.