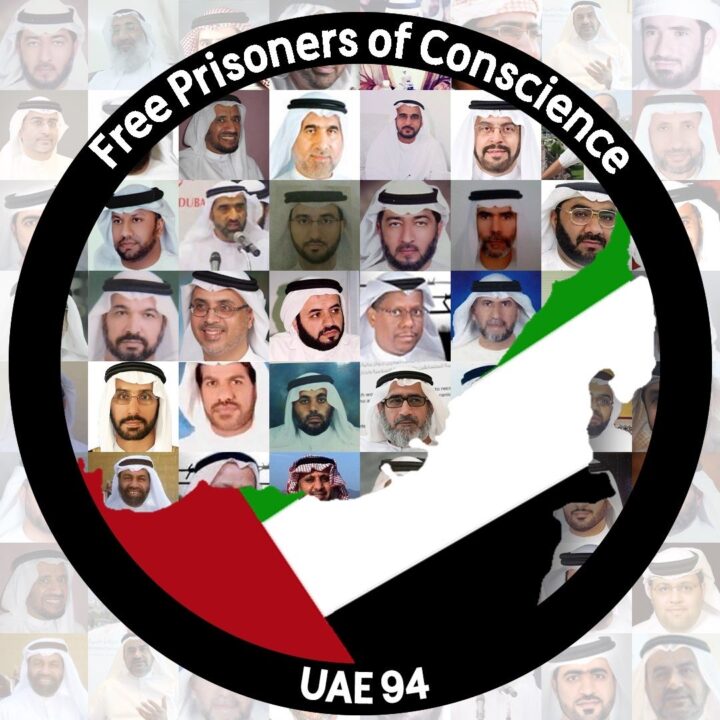 On the anniversary of the verdicts in the mass trial of prominent human rights defenders, lawyers, judges, academics and students known as the UAE94, we the undersigned call on allies of the United Arab Emirates (UAE) to press the Emirati authorities to immediately and unconditionally release all those convicted following a trial that lacked the most basic international standards necessary for a fair trial and due process. Many of those who were sentenced to ten years in prison are due for release this year, yet are being held past the end of their sentences.

Members of the UAE94 are among many prisoners of conscience imprisoned solely for the peaceful exercise of their rights to freedom of expression and freedom of association. The UAE has failed to conduct an independent, impartial and comprehensive investigation into the allegations that members of the UAE94 were subjected to torture and ill-treatment before and after their trial, and to bring those responsible for these violations to trial and provide redress and compensation to their victims.

On 2 July 2013, the Abu Dhabi Federal Supreme Court issued verdicts convicting 69 of the 94 defendants, including eight of those convicted in absentia, and acquitted 25 of them. Prison sentences ranged between seven and 15 years. Among those convicted are many prominent figures in Emirati society, including human rights lawyer Dr. Mohammed Al-Roken, a professor of constitutional law and the former president of the UAE’s Jurists Association; renowned lawyers and human rights defenders Dr. Mohammad Al-Mansoori and Salem Al-Shehhi; and human rights defenders Abdulsalam Mohammed Darwish Al-Marzouqi and Sheikh Mohammed Abdul Razzaq Al-Siddiq, both of whose children were left stateless after their citizenship was revoked by the authorities, leaving them without identification documents.

The signatures of the UAE94 on the reform petition, among 133 men and women from across the UAE’s intellectual, legal, human rights and political spectrum, was one of the main reasons they were targeted. In the petition, submitted on 3 March 2011 to the President of the State and members of the Supreme Council, who rule the seven Emirates, the signatories demanded “the election of all members of the Federal National Council by all citizens, as applied in democratic countries around the world;” and “amendments to the constitutional articles related to the Federal National Council to ensure it has full legislative and oversight powers.”

Among other signatories to this historic petition are prominent human rights defender and blogger Ahmed Mansoor, currently serving a 10-year prison sentence handed down in March 2015 for his human rights activism, and woman human rights defender Alaa Mohammed Al-Siddiq, who passed away in exile in the UK after an unfortunate accident in June 2021.

The response of the Emirati authorities to this reform petition was repressive, reflecting their rejection of other opinions and their disrespect for the civil and human rights of citizens. Many of its signatories were subjected to all kinds of reprisals, including arbitrary arrest and detention, and unfair prison sentences after sham trials on false charges, in addition to having their citizenship revoked and their property and assets being confiscated, and being dismissed from their jobs. Their family members also suffered similar retaliation.

On 13 September 2021, the UAE Cabinet issued a ministerial resolution adding 38 individuals and 13 entities to the government’s terror list. The list includes three human rights defenders and a researcher who are among those sentenced in absentia as part of the UAE94 group. They are, Hamad Mohammed Al-Shamsi, Executive Director of the Emirates Detainees Advocacy Center (EDAC), and human rights lawyer and former judge Mohammed Saqr Al-Zaabi, former president of the UAE’s Jurists Association who was sentenced in absentia to 15 years in prison; and academics and activists Ahmed Mohammed Al-Shaiba Al-Nuaimi and Saeed Nasser Al-Tenaiji.

On 25 January 2022, the UN Special Rapporteur on Human Rights Defenders and other UN experts wrote to the UAE to express their concern over the inclusion on the above-mentioned terrorist list of Al-Shamsi, Al-Zaabi, Al-Nuaimi, and Al-Tenaiji. The UAE government had not replied at the time of its publication.

The UAE authorities continue to carry out enforced disappearance, torture, and unjust sentences applying laws which are repeatedly used to prosecute human rights defenders, such as Federal Law No 2 of 2008, the Cybercrime Law, and the 2014 Law on Combating Terrorism Offences, which includes a vague and broad definition of terrorism and allows people to be indefinitely detained without charge or court sentencing, and to be held past the end of their sentences.

Many prisoners of conscience are held after their sentences have been served on the grounds that they allegedly pose a threat to state security and are in need of rehabilitation. Prisoners scheduled for release are transferred from Al-Razeen Prison to the Munasaha (Counselling) Centre, which despite its name signifying tolerance, is simply another building in the same prison which is isolated from the other wings. Currently, 17 prisoners of conscience are languishing in the Munasaha (Counselling) Centre buildings of the prisons, despite having completed their sentences. 14 of them belong to the UAE94.

Prisoners of conscience who are scheduled to be released in the coming months (until September 2022) have already been informed that they will not be released but will be subject to the so-called “counselling programme”.

In September 2021, the European Parliament adopted a wide-ranging resolution which calls for “the immediate and unconditional release of Ahmed Mansoor, Dr Mohammed Al-Roken and Dr Nasser bin Ghaith as well as all other human rights defenders, political activists and peaceful dissidents.” It urges the authorities to amend the Anti-Terrorism Law, the Cybercrime Law and Federal Law No 2 of 2008, which are repeatedly used to prosecute human rights defenders. Furthermore, the Resolution “deeply deplores the gap between the UAE’s claims to be a tolerant and rights-respecting country and the fact its own human rights defenders are detained in harsh conditions.”

We call on the leaders of the UAE’s allies, including the United States, the United Kingdom, Canada and EU member states, to urge the UAE authorities to fulfill their human rights obligations, and to show true tolerance, the first step being to release all imprisoned human rights defenders and other prisoners of conscience. We further call on the UAE to close so-called “counselling wings” or centres in prison and release all detainees who are being held past the end of their sentences, in flagrant violation of their civil and human rights and without legal basis.